$69.99
NOTE: This item is not available for immediate pickup at our store.

Nose: Opens with creamy and sweet notes of carrot cake, dulce de leche, and chestnut honey. The pear brandys influence inflects the core aroma, with poached pear leading blackberry and dried lime peel. Shimmering at the edges are countless herbs and dusty spices. Notes familiar to Sicilian amari, such as fennel seed, aniseed, nutmeg, and cacao are there. As Sicily was once part of the Duchy of Savoy licorice, wormwood and chamomile are encountered here, in Savoys tradition of genepy and absinthe.

The Spirit
Armida began as an experiment, trying to make a dream whiskey come to fruition: What flavors and aromas are we most excited to find in bourbon? Where in the world of spirits do those flavors exist? Can we finish and blend whiskeys to tease the subtle flavors we are looking for from the edges of perception into the forefront? More than a year later we find ourselves with a whiskey with subtle hints of spice and orchard fruit we chase in bourbons amplified into balance and power we have never found before.

Armida is a blend of three Straight Bourbon Whiskeys finished separately in Pear Brandy, Jamaican Rum, and Sicilian Amaro Casks. The ripe, floral pear notes provide a soft entrance into a whiskey that is adorned with hints of spice and arid citrus derived from the Amaro casks (and also the toasty bourbon itself). This mlange of flavor is framed by the tropical sweetness found in rum finished whiskeys. Armida is a journey for the palate: from a brisk northern orchard to an ancient island, it ends up exactly where we intended, with an immensely complex and satisfying whiskey.

While constructing the blend for this whiskey, Joe was taken by how nostalgic some of the combinations of flavors were. Joes mothers family had a farm in the northeast where he would often spend time in the summer and autumn. These brisk, orchard fruit memories inspired many of the first test blends and so, Joe named the project after his mothers formal name, Armida.

The Distillery
Barrell Craft Spirits, based in Louisville, Kentucky, is an independent blender and bottler of unique, aged, cask strength sourced whiskey and rum, recognized for its blending expertise. We design, produce, and launch Spirits with a focus on what people want now and not what has been successful in the past. This affords us access to some of the most interesting and delicious spirits in the world.

Our goal is to select and blend products that explore different distillation methods, barrels and aging environments, and bottle them at cask strength. Every batch is produced as a limited release and has an intentionally distinct flavor profile.

Barrell Craft Spirits has been highly rated by Whisky Advocate, including Editors Choice, and was named Best American Whiskey of 2018 in Forbes by whiskey authority Fred Minnick. Weve been awarded Best Bourbon twice at the San Francisco World Spirits Competition (SFWSC), once in 2017 and again in 2020. Other SFWSC awards include Best Small Batch Bourbon, Best Small Batch Bourbon over 11 years, Best Small Batch Bourbon 6-10 years and Best Overproof Rum, as well as nine Double Gold medals and seven Gold medals. Our award-winning line of products is currently sold in 43 states throughout the United States.

Press
Barrell Armida was included on Maxims list of The Best New American Whiskeys of 2020, noting that the unique blend creates a complex whiskey that pairs ripe, floral pear notes with hints of spice and citrus.

Barrell Armida was recently reviewed by Drew Beard of Drinkhacker, who described the palate as bold and rich with a rock candy sweetness that turns more brown sugar and molasses as it evolves.

Bourbon Culture reviews Barrell Armida, saying, "Barrell Armida will challenge and reward your senses with a wide array of flavors and aromas not typically found in bourbons or ryes."

Breaking Bourbon reviews Barrell Armida saying "As you journey through this whiskey from its aroma to its palate and finally to its finish, you realize its on an entirely different level ... Such a complex and unexpected combination of flavors it will challenge even the most experienced whiskey drinkers."

Adventures in Whiskey reviewed Armida, describing the playfulness between the crisp orchard fruit and the herbal and rum-like qualities, and declaring that Armida excels in its development of flavors.

View all from Barrell Bourbon 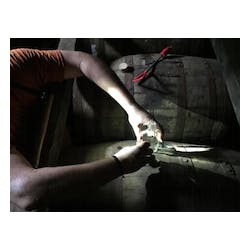 The idea behind this Barrell Craft Spirits is to "explore the unique effects of different distillation methods, barrels and aging environments, and bottle them at cask strength." This is accomplished through outstanding relationships within the tightly knit spirits community and sourcing the best distillates available without compromise. By definition, the bottlings of Barrell Spirits are limited in nature with new releases hitting the market frequently. Barrels are sourced from around the country (and soon the world), shipped to Barrell's facilities in Georgetown and Frankfurt, Kentucky for additional aging and bottling. Barrell Craft Spirits is dedicated to moving towards complete transparency. However, some of their partners insist upon production non-disclosures.