$199.99
NOTE: This item is not available for immediate pickup at our store.

"The palate opens thick and sweet at first with black cherries and red fruit stewed in dark brown sugar syrup and dusted with baking spices and cinnamon. This is quickly followed by a wave of peppery rye and tannic oak spice which washes
across the palate, bringing toasted oak notes, more red and black fruit notes, herbaceous charred oak notes, near burnt maple syrup, and dark chocolate before becoming faintly bitter and almost sour."

View all from Bomberger's Distillery 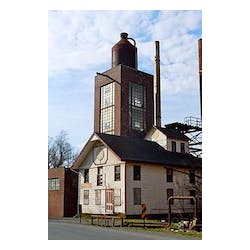 DICK STOLL
Mr. Stoll is the last member of a near extinguished legacy of distillers pre-dating the country itself; representing generations of dedication, commitment and skill hand crafting Pennsylvania Whiskey. Trained by C Everett Beam in both the Beam Family and Historical Pennsylvania Style, Dick served as Master Distiller of Pennsylvania Michter's where he also distilled the famed A.H. Hirsch Bourbon.

COLIN CAMAC
Colin doesn't like food, he loves it. Whether sneaking to the neighbors and joining family taco night as a precocious two year old, or skipping Six Flags for a chance to eat at Nobu in the fifth grade, he's followed his fork and never looked back. Over the last decade Colin opened and consulted on 10 different restaurants under the Fatty Crew umbrella both locally and internationally including 3 separate NY Times Two Star reviews.

DAVID COLE
Hailing from Seattle, David is a brand architect and packaging designer specializing in identity and package design for the distilled spirits industry. His work can be found in tasting rooms and liquor store shelves from California to Kiev -- and many places in between - including packaging work for recognized international brands such as Maker's Mark, Laphroaig and Teacher's. David's true love is working directly with small to mid-sized distillers who take personal pride in their work.