The history of Los Dragones of San Miguel de Allende is especially inspiring, and features prominently in the  ... read more

The history of Los Dragones of San Miguel de Allende is especially inspiring, and features prominently in the foundation of modern Mexico. At the epicenter of Mexicos lucrative silver trade in the late 1700s, San Miguel was an extremely prosperous town.
The Queens most elite cavalry, the Dragones, were strategically stationed in San Miguel to protect the Queens interests. By the late 1700s, the Dragones of San Miguel, an elite cavalry of the Queens army that had already been in Mexico for four generations, garnered much influence and power in business and trade throughout the region.
Led by General Ignacio Allende, the Dragones eventually began questioning the heavy taxes imposed on the Mexican people. During the late 1700s, the Dragones, led by General Ignacio Allende, joined forces with influential leaders in the church, including Father Hidalgo, the parish priest in nearby Dolores, to seek independence from Spain.
It was the passion and fortitude of these Dragones that forever changed the face of Mexico. eneral Ignacio Allende, head of the Queens army and leader of the Dragones, worked closely with Father Hidalgo to spark Mexicos Independence movement. On September 16th, 1810, Father Hidalgo delivered his cry of independence speech, known as El Grito.
Casa Dragones bottles commemorate this important date in Mexican history with a 16 on its label and a 16 inscribed on the bottom of every Casa Dragones Blanco bottle. 16 is also the address at La Casa Dragones.-Distillery Notes
About Casa Dragones
Casa Dragones is an independent, small batch producer with a passion for crafting exceptional tequila, one bottle at a time. Each bottle is hand-signed and numbered, hallmarking our commitment to quality. At Casa Dragones, it is our love of the craft and meticulous attention to detail that ensures an extraordinary experience and the highest possible quality.
View all Casa Dragones 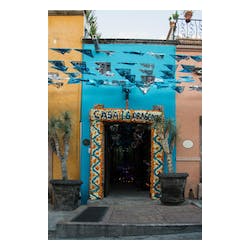