The vision for Ultramarine, as presented to our design agency, Stranger & Stranger,  ... read more

The vision for Ultramarine, as presented to our design agency, Stranger & Stranger, was the bluest label possible. Their extensive research revealed some fascinating routes to explore. One referenced the use of ultramarine as a sacred colour in art. Ultramarine was an incredibly expensive pigment to achieve, requiring the lapis lazuli stone. Only found in certain areas of what is now Afghanistan, lapis lazuli was a luxury of the ancient world and, in the case of paint pigment, was reserved for art with holy subject matter. The rarefied nature of ultramarine survives to this day and continues to convey a luxurious character to anything associated with it. Our label features Salacia, the Roman goddess of the deep ocean. She is the anchor for a giant ultramarine cloth, like youd see in paintings of the Madonna. The label seeks to draw link between the sea and Renaissance conceptions of preciousness and luxury.

Ultramarine launches the Extinct Blends Quartet and is our reimagining of a deluxe Scotch that emerged in the late 1980s. The first few batches of this iconic whisky were based around characterful stocks of malt and grain, drawn from Scotlands Whisky Loch of the late 70s and early 80s. While still a fascinating product today, a compelling antique quality can be found in the earliest bottlings. Meaning beyond the sea, Ultramarine builds upon peated malts, Sherry maturation, and boldly creamy grain whisky. Like the three releases that will follow, we have used our imaginations and extremely tasty parcels of whisky to offer modern interpretations on great blended Scotch of the past.
About Compass Box Whiskey Co.
Compass Box was launched in 2000 by the American John Glaser, who was previously International Marketing Director at Johnnie Walker. To promote his whisky, John travelled through London visiting pubs and bars with samples and, in idiosyncratic style, handing out business cards billing himself as "John Glaser – Whisky Zealot".

Compass Box's modus operandi and strong work ethic is what sets them apart as an independent bottler and blender like no other. Compass Box buy individual casks and focus on creating a craftsman-like boutique product. None of their bottlings are chill-filtered, nor is any colouring added and are all married exclusively in American oak. This brings the characteristic sweetness to the whisky.

One of their unique expressions and a superb example of their methodology is Compass Box Hedonism. This is a marriage of between eight and fifteen different grain whiskies, most of which are over twenty years old and all are aged in first-fill American oak. Hedonism went on to be heralded as the World's Best Grain Whisky at the 2008 World Whisky Awards. John Glaser was himself featured four times in Whisky Magazine as Innovator of the Year
View all Compass Box Whiskey Co. 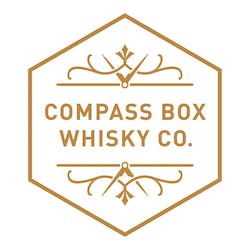