" Don Julio Blanco, 100 Blue Weber Agave , double distilled, and pure with fresh Agave aromas. Each agave is hand selected at maturity and only the heart of the distillation is used, as it is the purest part, free from most impurities.
Don Julio founded his own distillery in 1942 and since then has aspired to produce Mexico's finest Tequilas by perfecting traditional methods. " ~ Distillery notes

View all from Don Julio Tequila 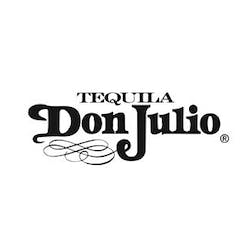 Don Julio is a brand of tequila produced in Mexico. It is the eighth largest brand in the United States by volume and eleventh largest in Mexico. It is distilled, manufactured, bottled, sold, and distributed by Tequila Don Julio, S.A. de C.V. from its corporate facility in the Colonia El Chichimeco district, in the city of Atotonilco El Alto, Jalisco, Mexico. It is distributed in the United States by Diageo, under licensing from its patent holder, Tequila Don Julio, Sociedad Anónima de Capital Variable, Jalisco, Mexico, but it is sold world wide.