Buffalo Trace Distillery has announced the tenth member of their Col. E. H. Taylor, Jr. line, Amaranth Bourbon Whiskey, crafted using the “Grain of the Gods.”
While all bourbons must be 51% corn, Buffalo Trace’s E. H. Taylor line traditionally uses rye as a flavoring grain to make up the second largest percentage. The new release uses Amaranth, an ancient grain used by the Aztec people in both daily meals and religious ceremonies. The plant, which is similar to wheat, was such a part of their life that it was known as “the Grain of the Gods.”
While wheat is known for adding softer and silkier flavors to a bourbon, Amaranth adds new and complex flavors that range from butterscotch and spearmint on the nose, or pecans and dark berries on the finish. Official tasting notes from the distillery for the new release include a nose of “fresh spearmint… followed by honey, with a hint of cherry.” On the palate, we’re told to expect coffee and vanilla with a long finish of oats and honey. 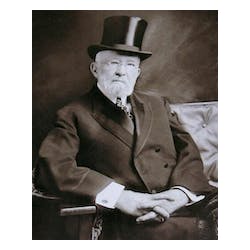 As founding father of the bourbon industry, Colonel Edmund Haynes Taylor, Jr. left an indelible legacy. His dedication to distilling began at the close of the Civil War when he purchased O.F C. Distillery. There, he developed innovative techniques that are still in use today. Made by hand, this Small Batch Bourbon Whiskey has been aged inside century old warehouses constructed by E.H. Taylor, Jr. Barrels are evaluated and selected to create a perfect blend of distinctive character that is like no other. This bourbon is a true sipping bourbon that honors the uncompromising legacy of E.H. Taylor, Jr.