store shelf
Brand: Four Pillars
Category: Gin
Size: 750mL (liquor)
Alcohol by vol: 37.8%
Item ID: #27726
Location at store: 38c
Region: Australia » Yarra Valley
Information
Questions
Size / Vintage Options
Reviews
Item Description
"Bloody Shiraz Gin is what.
We'd be crazy not to utilize the incredible calibre of cool climate fruit available to us in the Yarra Valley. So around Easter time in 2015, we steeped our first Yarra Valley Shiraz grapes in high proof Rare Dry Gin for eight weeks.
The fruit was de-stemmed but kept mainly as whole berries, and the tanks were kept cold and stirred daily. After eight weeks we pressed the fruit before blending with more Rare Dry Gin.
The beauty of Bloody Shiraz Gin being a product of vintage means that it will never be the same. This year was cooler, giving us a longer ripening time. That means were seeing a more vibrant ruby colour in the 2017 release, with true Yarra Valley shiraz characters - earthiness, complexity and subtle white pepper spice. But still with that balanced sweetness of the previous releases.
Aromatically it shows fresh pine needles, citrus and spice, and distinct peppery, dense raspberry notes. The palate is lovely and sweet with a long juniper and spice character on the finish.
Unlike Sloe Gin (which is less than 30 ABV), the alcohol is 37.8. So it packs a punch and is ideal in a range of cocktails, like Sam's 'Bloody Floradora'. We also love it straight on the rocks in all its pure purple glory, garnished with a slice of orange. Or in a fabulously colourful G&T!"
About Four Pillars
It all started back in 2013 with three mates and one extraordinary copper still. We called her Wilma (after Cameron's beautiful late mother), and she has since been joined by Jude, Eileen, Beth and Coral. Six years later, in 2019, Four Pillars Gin was named the world's leading gin producer by the IWSC in London. We won again in 2020, making Australia's favourite gin officially the world's best.

Making gin anywhere would be exciting. But we don't make gin anywhere. We make it here. In Australia. The most delicious, diverse and creative place on earth. And that's why we get to combine intense creativity around gin with a huge passion for hospitality and gin-fuelled fun.
View all Four Pillars 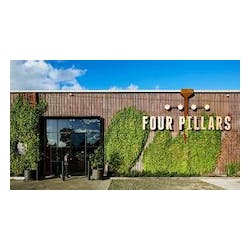