Tasting Notes
"Amongst the most coveted rums in the world, each release of the Exceptional Cask Series aims to achieve balance relative to a desired profile, resulting in distinct vintages. This release, Mark XXI, is exceptionally elegant despite the high proof, with a refinement that once again makes an argument for Barbados rum as one of the greatest sipping spirits on the planet."

Brand: Foursquare Distillery
Category: Rum
Size: 750mL (liquor)
Item ID: #51003
Region: Barbados
Information
Questions
Size / Vintage Options
Reviews
Item Description
Tasting Notes
"Amongst the most coveted rums in the world, each release of the Exceptional Cask Series aims to achieve balance relative to a desired profile, resulting in distinct vintages. This release, Mark XXI, is exceptionally elegant despite the high proof, with a refinement that once again makes an argument for Barbados rum as one of the greatest sipping spirits on the planet."

Amongst the most coveted rums in the world, each release of the Exceptional Cask Series aims to achieve balance relative to a desired profile, resulting in distinct vintages. This release, Mark XXI, reveals a lively nose of star anise, spiced orange, vanilla, and licorice root with undertones of Black Forest cake. A lengthy, elegant palate opens with more baking spicecinnamon and clovebefore progressing into bananas foster, fresh plum, and salted caramel with notes of pineapple and toasted pine nut.

Exceptionally elegant despite the high proof, Foursquare Exceptional Cask Selection 2010 displays a refinement that once again makes an argument for Barbados rum as one of the greatest sipping spirits on the planet. Non-chill filtered; 60% ABV.

The Distillery
Foursquare Rum Distillery is tucked away in the southern countryside of Saint Philip, Barbados, on 7 acres of a former sugar plantation and has been producing exceptional, authentic Barbados rum for over 25 years. One of the most respected and admired producers of spirits in the worldand the only family-owned distillery on the islandFoursquare Distillery was established in 1996 by Sir David Seale and is currently operated by his son, Master Distiller and Master Blender, Richard Seale.

Though the distillation of sugarcane predates the colonization of Barbados, the island is generally considered the birthplace of what we consider rum today. Certainly one of the oldest, if not the oldest, rum producing countries in the Caribbean, its first sugarcane plantations were established in the 1640s, almost immediately after British colonization. The area formerly referred to as square pond, prone to flooding due to its low elevation, provided a vital water source for these plantations and become known as Foursquare. Eventually, the largest estate claimed the name Foursquare, and the original Distill House, the oldest building on the property and a government-protected landmark, was built in 1737. This windmill-powered distillery processed molasses and made rum until the 1800s when the loss of the American export market post-American Revolution forced production to cease.

Foursquare instead focused on growing its sugar factory and split off from the estate. When the sugar and molasses factory shuttered in the late 1980s, it remained derelict until the R.L. Seale Co. saw an opportunity to finally make the move from blender and bottler to full-on distiller. As they say, when one door closes, another one opens

R.L. Seale & Co. was formed in 1926 by Reginald Leon Seale as a merchant blender and bottler of rum in Barbados, but it wasnt until 1996 that Foursquare Rum Distillery began distilling in the former Foursquare sugar factory under fourth-generation Seale, Richard.

Today, Richard Seale, a titan within the rum world and a champion for spirits of integrity, combines traditional Barbados methods of rum production with contemporary technological innovationsfrom strictly controlled fermentation to vacuum distillation. An outspoken advocate for truth and transparency, he produces rums in accordance with the proposed Barbados Rum G.I. that requires distillation, maturation, and bottling be conducted entirely in Barbados, without additives or adulterating substances.

Foursquare rums are produced using coral stone- and karst limestone-filtered water from local aquifers. Both locally sourced and Guyanese molasses are fermented with distillers yeast from South Africa for 4448 hours before distillation. All Foursquare rums are distilled in either a double retort copper pot still or a twin column Coffey vacuum still. These rums undergo the beginning of the blending process before barreling, where they are tropically matured in the distillerys four aging warehouses that contain a combined 45,000 barrels of aging stock.

With consideration for the environment, a waste treatment plant at the distillery treats and purifies liquid waste for irrigation of the sugarcane and other crops grown around the distillery while solid waste is sent to the US to be used as animal feed. Additionally, CO2 is collected throughout production and kegged for use in soft drinks on the island.

In just 25 years, Foursquare Distillery has grown from a repurposed sugar factory to a national heritage site, folk museum, and one of the greatest operating distilleries in the world. Driven by a belief that rum should take its rightful place as the most prestigious of all spirits, Foursquare does it right.
About Foursquare Distillery
Foursquare Rum Distillery is located on a former sugar plantation that dates back to 1636 within the tiny Caribbean island of Barbados. Founded by the Seale family, distilling operations and blending are currently directed by Richard Seale, 4th Generation Trader/Distiller.
View all Foursquare Distillery 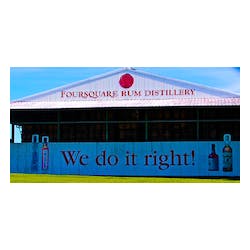