View all from Glenlivet Distillery 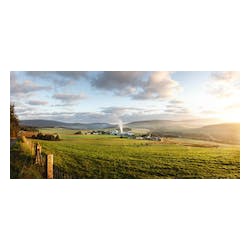 The remote and isolated Livet valley made it ideal for illicit distillation. This is where our founder George Smith learned his craft. Hidden away from the Customs Officers and soldiers amongst the hills and abundant springs, George had time to distil slowly making a whisky that would soon become world renowned. In August 1822, King George IV arrived in Scotland for a state visit and asked to try a drop of the infamous Glenlivet whisky. An illegal dram it was, but even that didn't stop the King.

To this day, The Glenlivet remains the benchmark that all other Speyside single malts are measured against. It's the definitive whisky that brings us together. And it must be said, we take great pride in setting that standard. To quote Captain Bill Smith Grant, "If we can't make good whisky, then we shouldn't make any whisky". We'll raise a glass to that.