Gordon’s gin is triple-distilled and its botanicals include juniper berries, coriander seeds, angelica root. There is one other botanical which is kept under wraps; it, along with the recipe, is reputed to be known to only eleven people in the world.

View all from Gordon's 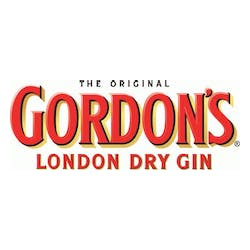 Gordon's London Dry Gin was developed by Alexander Gordon, a Londoner.[4] He opened a distillery in the Southwark area in 1769, later moving in 1786 to Clerkenwell.[4] The Special London Dry Gin he developed proved successful, and its recipe remains unchanged to this day.[5] Its popularity with the Royal Navy saw bottles of the product distributed all over the world.[6]

In 1898 Gordon & Co. amalgamated with Charles Tanqueray & Co. to form Tanqueray Gordon & Co.[4] All production moved to the Gordon's Goswell Road site.[4] In 1899, Charles Gordon died, ending the family association with the company.[7]

In 1904 the distinctive square-faced, green bottle for the home market was introduced.[4] In 1906 Gordon's Sloe gin went into production.[4] The earliest evidence in recipe books for the production of Gordon's Special Old Tom was in 1921.[4]

In 1922 Tanqueray Gordon & Co. was acquired by the Distillers Company.[4] In 1924 Gordon's began production of a 'Ready-to-Serve' Shaker Cocktail range, each in an individual shaker bottle.[4]

In 1925 Gordon's was awarded its first Royal Warrant by King George V.[4] In 1929 Gordon's released an orange gin followed by a lemon variety in 1931.

In 1934 Gordon's opened its first distillery in the USA, at Linden, New Jersey.[4]

"Fine for the price."

Francis on Jun 2, 2020  [Verified Purchase]
Scroll to the top of this page