5 of 5 (6 reviews)
Item Sold Out
Notify me when this item is available
"A refreshing take on the classic Hendricks Gin, this gin is a tribute to the Midsummer Solstice. Using a secret selection of flowers, Hendricks have created a gin with an intensely floral bouquet that blossoms on the palate. The nose has notes of juniper mingling with delicate floral aromas, orange blossoms and zesty lemon notes. The palate offers notes of summer flowers that complement the classic juniper, spice and rose petal notes of Hendricks gin."
Item ID: #32975
Brand: Hendrick's Distillery
Category: Gin
Region: Scotland
Size: 750mL (liquor)
Other sizes
Share this item on FacebookFollow Empire Wine on TwitterFollow Empire Wine on Pinterest

"A refreshing take on the classic Hendricks Gin, this gin is a tribute to the Midsummer Solstice. Using a secret selection of flowers, Hendricks have created a gin with an intensely floral bouquet that blossoms on the palate. The nose has notes of juniper mingling with delicate floral aromas, orange blossoms and zesty lemon notes. The palate offers notes of summer flowers that complement the classic juniper, spice and rose petal notes of Hendricks gin." 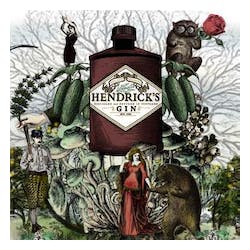 Rachel on Jun 19, 2019  [Verified Purchase]
View more reivew
Scroll to the top of this page