store shelf
Brand: High West Distillery
Category: Ready to Go Cocktails
Size: 375mL (Liquor Gift Set)
Item ID: #44154
Location at store: 2004b
Region: » Utah
Information
Questions
Size / Vintage Options
Reviews
Item Description
High West Manhattan and High West Old Fashioned Barrel Finished Ready Made Cocktail Whiskeys are quality, intricate renditions of two truly classic whiskey cocktails, pre-batched and ready to drink, and handsomely packaged in a luxury whiskey gift set. The Manhattan cocktail harmoniously balances sweet, rich, bitter, and spice, featuring sweet and dry vermouth, a few dashes of aromatic bitters, and straight bourbon and rye whiskeys from High West Distillery. The Old Fashioned cocktail features an unrefined raw sugar simple syrup, a few dashes of aromatic bitters, and the same straight bourbon and rye whiskeys from High West. What isn't classic, but adds depth and complexity to each exceptional version of these good whiskey drinks, is barrel aging. These ready made mixed drinks are aged for an additional three months in used rye whiskey barrels to fully marry their flavors. Delicious yet easy whiskey drinks are ready to enjoy when you open this whiskey box gift set's 375 mL bottles, each one with enough for six cocktails; gently swirl each whiskey bottle's contents, serve over ice in your favorite cocktail glasses, and garnish with brandied cherries for the Manhattan and an orange or lemon twist for the Old Fashioned.
About High West Distillery
High West Distillery was founded in 2009 by David Perkins and his wife, Jane. David, a former biochemist, was inspired to open his own distillery after seeing the parallels between the fermentation and distilling process and his own work in biochemistry during a trip to the Maker's Mark Distillery in Loretto, Kentucky. In 2009, David and his family relocated to Park City, Utah to open the first legal distillery in Utah since 1870. They chose Park City because of David's love of the Old West and Utah's little-known whiskey history (see Utah's Distilling History for more).

High West's products? have received numerous?accolades and awards. In 2011,?Whiskey Advocate,?America's leading whiskey magazine, named High West its "Whiskey Pioneer of the Year."? We love to show off our traditional 1,600-gallon copper pot still and share the wonders of whiskey with our guests. Swing by the new distillery to take an educational whiskey tour and if you're feeling adventurous, a whiskey tasting as well. Call 435-649-8300 or visit the Tours Page to schedule your tour at our truly unique distillery in the mountains.?
View all High West Distillery 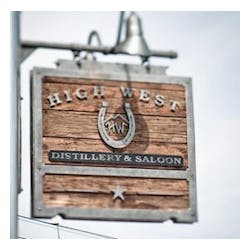