Item Sold Out
Notify me when this item is available
While this item isn't currently available:
"Made from all natural flavors, Hiram Walker Triple Sec is "triple dried" with three distillations. Imported orange peel is then softened in water and added to the spirit for a clean, crisp orange taste." ~Distillery notes

"Made from all natural flavors, Hiram Walker Triple Sec is "triple dried" with three distillations. Imported orange peel is then softened in water and added to the spirit for a clean, crisp orange taste." ~Distillery notes

View all from Hiram Walker 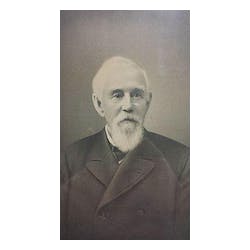 Hiram Walker® produces one of the broadest portfolios of Liqueurs in the world - 43 distinct and naturally delicious products from contemporary Schnapps to classic Brandies. Hiram Walker Liqueurs are made using only the best all natural ingredients — making them must-haves for anyone who takes cocktails seriously.

Hiram Walker started producing spirits in 1858, and he pioneered numerous distillation and manufacturing processes that are now industry standards. For example, Hiram Walker was one of the first alcohol producers to begin placing labels on his bottles.

In 1857, Hiram began to extend his grain business into more areas throughout the United States and Canada.[45] Hiram began purchasing land on the Canadian side of the Detroit River, in what is now Windsor, Ontario.[46] This land was originally considered part of the Labdie farm.[47] He began his distillery operation in Windsor, in 1858.[48] He was considered one of the largest landowners in Ontario, and over his entire lifetime, his land possessions measured around 10,000 acre, most of which along the Walkerville and Detroit River Railroad.[49] The location of Hiram's property was extremely valuable because the Great Western Railway was in close proximity and enabled Walker to move products from his distillery and cattle yards.[50]