Item Sold Out
Brand: Maker's Mark
Category: Bourbon
Size: 750mL (liquor)
Item ID: #51226
Region: » Kentucky
Information
Questions
Size / Vintage Options
Reviews
Item Description
When it comes to the fourth Wood Finishing Series, the staves are only part of the story. With this limited dual release, people can enjoy the unique experience of tasting flavors inspired by our barrel hand-rotation process. These expressions let you taste the flavor differences inspired by the hotter top (BRT-01) and the cooler bottom of the rackhouse (BRT-02).
About Maker's Mark
Maker's Mark is unusual in that no rye is used as part of the mash. Instead red winter wheat is used, along with corn (the predominant grain) and malted barley. During the planning phase of Maker's Mark, Samuels allegedly developed seven candidate mash bills for the new bourbon. As he did not have time to distill and age each one for tasting, he instead made a loaf of bread from each recipe and the one with no rye was judged the best tasting. Samuels also received considerable assistance and recipes from Stitzel-Weller owner Pappy Van Winkle, whose distillery produced the wheated Old Fitzgerald and W. L. Weller bourbons.[20]

Maker's Mark is aged for around six years, being bottled and marketed when the company's tasters agree that it is ready. Maker's Mark is one of the few distillers to rotate the barrels from the upper to the lower levels of the aging warehouses during the aging process[citation needed] to even out the differences in temperature during the process. The upper floors are exposed to the greatest temperature variations during the year, so rotating the barrels ensures that the bourbon in all the barrels have the same quality and taste.
View all Maker's Mark 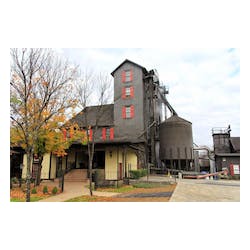