On the nose, the saline peat takes over both the fruity aromas of apple, pear and yellow melon, as well as the floral aromas of lily and carnation. On the palate, the peaty side  ... read more

On the nose, the saline peat takes over both the fruity aromas of apple, pear and yellow melon, as well as the floral aromas of lily and carnation. On the palate, the peaty side is reinforced as well as the fruity and floral aromas with the appearance of notes of mirabelle plum and greengage and tulip and cyclamen. The quite long finish will bring notes of plum and licorice coated by a peat which evolves towards smoked notes.-Distiller Notes

The founder of Nikka and the father of Japanese whisky, Masataka Taketsuru came from a long line of sake brewers dating back to 1733. Destined to continue the legacy of making spirits, he trained as a chemist and was quickly recruited by the liquor company Settsu Shuzo. With a plan to make Japanese whisky, Settsu Shuzo sent Taketsuru to Scotland in 1918. He enrolled at the University of Glasgow, and became the first Japanese to study the art of making whisky. He took chemistry courses at the university and apprenticed at distilleries, learning first-hand from craftsmen and training as a blender. During his apprenticeship, Taketsuru met Jessie Roberta Cowan, a Scotswoman, with whom he fell madly in love. They married a year later. Jessie changed her name to Rita, and moved with Taketsuru back to Japan, to become his eternal muse and support throughout his career.-Distillery Notes
About Nikka
In 1918, a young Japanese man with an ambition to make genuine whisky went alone to Scotland to unveil the secret of whisky making. He is Masataka Taketsuru, the founder of Nikka Whisky. Given the chance to go to Scotland, Masataka became the first Japanese ever to master how to make whisky. He enrolled at the University of Glasgow, took chemistry courses and then apprenticed at three Scotch distilleries. The young and passionate man was fortunate to learn first-hand from craftsmen and have practical trainings to master blending. The two notebooks filled with every detail later became Japan's very first guide in whisky production. In 1920 Masataka returned to Japan with his Scottish wife Jessie Roberta (Rita). The two had married earlier that year and Rita decided to immigrate to Japan to support her husband's dream. However after returning to Japan, Masataka and Rita were heartbroken to find out that Settsu Shuzo, the company which invested in Masataka to learn in Scotland, had to abandon its plan to produce genuine whisky in Japan due to recessions after World War I.
In the meantime another company, Kotobukiya Limited (Suntory), was in search for someone who could conduct whisky production. Being the only Japanese who knew how to produce whisky at that time, Masataka was hired by Kotobukiya in 1923 to direct building the Yamazaki Distillery. There he led the project and devoted himself to producing Japan's first genuine whisky.
View all Nikka 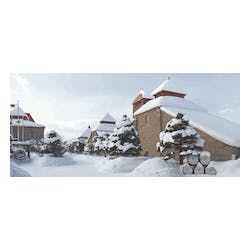