$399.99
NOTE: This item is not available for immediate pickup at our store.

Tasting Notes
Color: Rich mahogany
Nose: Complex, very spicy for a wheated bourbon
Taste: Starts with the spices that were in the nose but becomes soft and gentle with honey and cake notes. Vanilla and oak follow with a delicious caramel tail.
Finish: Warm, long, sweet

View all from Old Fitzgerald 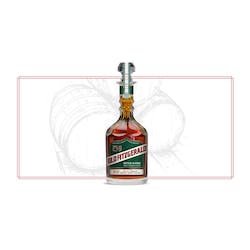 As the leader of the Bottled-in-Bond category, Heaven Hill is proud to offer a premium, allocated product within this special class that showcases the authenticity and quality of the American Whiskey portfolio. Acquired in 1999 by Heaven Hill, the legendary Old Fitzgerald line is well-known for its distilling pedigree and intriguing story behind its namesake, John E. Fitzgerald. Comprised of barrels produced from February through May of 2006, and bottled in April of 2018, the first release ushers in the latest hallmark series to the Bottled-in-Bond legacy.