$55.99
Tasting Notes
This whisky is the original Penderyn house style, aged in ex-bourbon barrels and finished in ex-Madeira wine casks to bring out its full, golden character. It is bottled at 46 abv.

Nose: A classic freshness with aromas of cream toffee, rich fruit and raisins.

Palate: Crisp and finely rounded, with the sweetness to balance an appetising dryness.

Tasting Notes
This whisky is the original Penderyn house style, aged in ex-bourbon barrels and finished in ex-Madeira wine casks to bring out its full, golden character. It is bottled at 46 abv.

Nose: A classic freshness with aromas of cream toffee, rich fruit and raisins.

Palate: Crisp and finely rounded, with the sweetness to balance an appetising dryness.

The Spirit
Penderyn Single Malt Whisky was launched on March 1, 2004a date which signalled the return of whisky distillation to Wales after an absence of more than 100 years. The distillery was officially opened by HRH, Prince Charles, and championed by the late Dr. Jim Swan, a legendery force in the world of whisky and also Penderyns master blender. The whisky is distilled in a unique, specially-commissioned still that produces a flavourful spirit at 92 abv which is then married with fresh spring water drawn from directly beneath the distillery at Brecon Beacons Park. An exciting project with the heart of Wales behind it!

View all from Penderyn Welsh 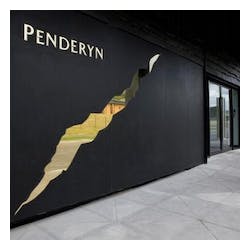 ...but in the late 1990s, in a pub in a small post-industrial Welsh valley town, a group of friends drank and chatted about establishing the first whisky distillery in Wales in over a century. They dreamt of creating a whisky as pure and precious as Welsh gold, represented today by Penderyn's 'gold seam'.

The friends had a location in the historic village of Penderyn on the southern tip of the Brecon Beacons, chosen because of the site's own supply of fresh natural spring water. They also had a unique copper single-pot still designed by Dr David Faraday, a relative of the great 19th-century scientist Michael Faraday. Penderyn Whisky was launched on St David's Day 2004 in the presence of HRH Prince Charles.

At Penderyn we produce our own malted barley spirit which, when matured, is recognised worldwide as one of the finest single malt whiskies. The majority of our spirit goes into casks for ageing in our cellars. The remainder is used to craft other award-winning products. With investment, inspiration, hard work, attention to detail, the finest barley, expert distillers and the best American oak bourbon casks, Penderyn Whisky has quickly gained a worldwide reputation winning several awards en route and we have recently found new markets in countries such as China, Russia and Australia.