store shelf
Brand: Pinhook
Category: Bourbon
Size: 750mL (liquor)
Item ID: #49409
Location at store: 46d
Region: » Kentucky
Information
Questions
Size / Vintage Options
Reviews
Item Description
Tasting Notes
"Pinhooks Bourbon Vertical Series is a unique opportunity to follow a group of high-rye MGP bourbon barrels as they age from 4 to 12 years and to experience the evolution of flavor throughout that 9-year journey. The fourth of nine releases, 2022s expression is a 7-year-old straight bourbon whiskey distilled at MGP in Indiana before being aged, blended, and bottled at Castle & Key Distillery in Frankfort, KY, by Pinhook Master Blender, Sean Josephs. With a mash bill of 75% corn, 20.5% rye, and 4.5% malted barley, this bold and piquant bourbon exhibits a warm and opulent nose with aromas of freshly baked raisin bread, brown butter, and burnt sugar which transition to a rich palate of ginger snap cookies, dried fig, molasses, and hint of eucalyptus. The highest proof yet of a Vertical Series bourbon, Bourbon War is only getting better with age. Non-chill filtered; 57.5% ABV."

The Spirit
Fourth of nine limited annual releases from Pinhooks Bourbon Vertical Series
7-year-old straight bourbon whiskey
Distilled at MGP in Indiana; aged, blended, and bottled at Castle & Key Distillery in Frankfort, KY, by Pinhook Master Blender, Sean Josephs
Mash bill of 75% corn, 20.5% rye, 4.5% malted barley
Aromas of freshly baked raisin bread, brown butter, and burnt sugar transition to a rich palate of ginger snap cookies, dried fig, molasses, and eucalyptus
Non-chill filtered; 57.5% ABV
The Bourbon Vertical Series is a unique opportunity to follow a group of 1,350 MGP high-rye barrels as they age from four to twelve years and to experience the evolution of flavor throughout that nine-year journeyall curated with the attention to flavor profile and proof that distinguishes the Pinhook ethos. The highest proof yet in the Vertical series, Bourbon War is only getting better with age.

The Distillery
Pinhook was founded in 2010 by barman Sean Josephs and a team of top designers and marketing directors with a passion for American whiskey. Before creating Pinhook, Josephs founded some of the top whiskey bars in the United States, including Char No. 4 and Maysville in New York, and Kentons in New Orleans. Serving as Master Blender since the brands inception, Josephs contributes his palateinformed by his experience as a certified sommelierto his role as Pinhooks Master Blender.

Pinhook is built upon one clear concept: Every year, they release a new batch of bourbon & rye and the whiskey in each release is intended to be the best expression of their barrels at that moment in time. Blends and proofs change batch to batch to best highlight that releases unique attributes and can be thought of, quite appropriately, as a whiskey vintage.

Pinhooking is a term used to describe the practice of buying young, thoroughbred horses, overseeing their initial development, and then re-selling them as race-ready champions-in-training with an aim towards the ultimate prizea winning run at the Kentucky Derby. The Pinhook brand pays tribute to this practice and the parallels between investing in a horses potential and that of a young whiskey; optimism, patience, and vision are paramount when both training a young horse for future victory and aging whiskey until its ready to blossom in-glass.

Today, the newly restored Castle & Key Distillery in Frankfort, KY, plays home to Pinhooks operations. Built in the late 1800s, Castle & Key was the original residence for Old Colonel Taylor. Pinhook has begun releasing whiskey crafted and distilled by Castle & Keyamongst the first distillates made there since its restorationand featuring Pinhooks carefully selected proprietary mash bills for bourbon and rye.
About Pinhook
Every fall Pinhook releases a new bourbon and rye, each of which is connected to a promising young thoroughbred horse. The whiskey in each release is the best expression of our barrels at that moment in time, and we blend and proof each release to be as unique as the horse on the label. The result is an annual vintage of Pinhook Bourbon and Pinhook Rye that become instant collectibles. And while it is impossible to know if the horse on the bottle will go all the way to the Kentucky Derby, there is no gamble on the quality of what's inside.


Pinhooking is an old Kentucky term for purchasing young thoroughbreds, holding them until they mature, and selling them when they are ready to run. Successful pinhooks – much like whiskey -- are made on instinct, experience, an appreciation of quality, and a little luck. We handcraft our bourbon and rye to reflect the richness of the Kentucky soil and the character of its beautiful horse country, where we run our operations out of the newly restored Castle & Key distillery in Millville, KY
View all Pinhook 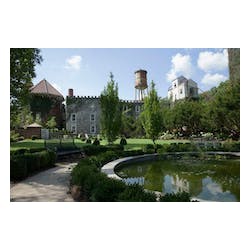