store shelf
Brand: Ron Matusalem
Category: Rum
Size: 750mL (liquor)
Alcohol by vol: 40%
Item ID: #6548
Location at store: 36c
Region: Dominican Republic
Information
Questions
Size / Vintage Options
Reviews
Item Description
"Ron Matusalem Clasico is exotic rum with a golden hue, fashioned from select rums aged in New World oak and aged for 10 years. It encompasses the distinctive quality and outstanding smoothness that enhances the flavor of any cocktail you crave. Brewed today with the original Cuban recipe, Classico is full bodied with hints of roasted nuts and caramel." ~ Distillery notes
About Ron Matusalem
Matusalem & Company was founded by brothers Benjamin and Eduardo Camp, who left Spain and settled in Santiago de Cuba in 1872 for the purpose of establishing a rum distillery.[1]:38,[6] The Camp brothers brought with them their knowledge and expertise in the solera system of blending and distillation used in making Spanish cognac and sherry.[1]:38

During the 1950s, the brand was one of the top premium rums in Cuba, competing with Bacardi and Havana Club.[1]:175

Following the Cuban revolution 1959, the family-owned Matusalem brand went into exile, and was established in the United States. The Cuban government continued to make rum in the former Matusalem factory in Santiago de Cuba.[7]

Three branches of the family began feuding in 1981, resulting in court cases that extended into the mid-90s. These ended in 1995 when Dr. Claudio Alvarez Salazar, the great-grandson of the founder, gained control of the Matusalem trademark in an out-of-court settlement.
View all Ron Matusalem 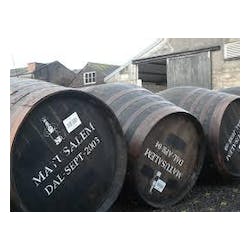