Suggested Mixer: Chairmans Reserve Spiced Rum is best enjoyed with cranberry juice or ginger beer on ice with a grating of fresh nutmeg.

Suggested Mixer: Chairmans Reserve Spiced Rum is best enjoyed with cranberry juice or ginger beer on ice with a grating of fresh nutmeg.

The Rum
Chairmans Reserve was first blended in 1999 and was overseen by the then Chairman, Laurie Barnard. A blend of column and pot distilled rums, aged for an average of 5 years in used American oak casks, with an additional 6 months aging after the rums are combined. The pot still richness comes through on the nose with sweet honeyed fruit and spicy vanilla from the oak. The palate is balanced, with a mellow but complex mix of ripe raisin fruit, tobacco and spice. The rum has a long enjoyable finish. In St. Lucia Chairmans reserve is best enjoyed with coconut water but can be drunk neat or with a chaser of your choice.

Chairmans Reserve Spiced Rum is the latest addition to St. Lucia Distillers portfolio of world class rums. The rum contains local spices and fruits including cinnamon, clove, nutmeg, vanilla, coconut, all spice, lemon and orange. We have also added Richeria Grandis known locally as Bois Bande a bark renowned in the Caribbean as a potent aphrodisiac to give an added kick to the rum.

These spices and fruits are added to rums distilled in copper alembic pot and continuous stills that are then aged in Kentucky Bourbon barrels to give a complex and balanced spice rum. We have found Chairmans Reserve Spice benefits from a combination of steeping certain spices and Bois Bande in the rum for up to a year while the other ingredients are added during the blending process. In this way we can bring out the flavour of the spices and fruits while preserving the complexity and harmony of the underlying rum.

The Distillery
Sugarcane arrived in St Lucia in the 18th Century, and its molasses byproduct continued the growth of the Caribbeans thriving rum trade. By the 1950s, however, most Caribbean rum producing islands had slowed their pace, and St Lucia was no exception only two producers remained, in Dennery & Roseau, and soon the two joined forces under the Barnard family banner of the St Lucia Distillers Group. The operating distillery now remains in Roseau; featuring extensive environmental initiatives, Chairmans Reserve distills outstanding rums in a St Lucia style using molasses sourced primarily from Guyana, after a 24-30 hour closed fermentation period. 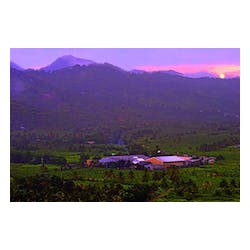