store shelf
this is a 50mL (plastic) which is smaller than a regular 750mL bottle.

Brand: Smirnoff
Category: Vodka
Size: 50mL (plastic)
Item ID: #50709
Location at store: 120a
Region: United States
Information
Questions
Size / Vintage Options
Reviews
Item Description
With a deliciously cool and sweet candied peppermint aroma, Smirnoff Peppermint Twist is perfect as a chilled shot or mixed in your favorite holiday cocktail. A candy cane garnish is a must!
About Smirnoff
Pyotr Smirnov founded his vodka distillery in Moscow in 1864 under the trading name of PA Smirnoff, pioneering charcoal filtration in the 1870s, and becoming the first to utilize newspaper ads along with charitable contributions to the clergy to stifle anti-vodka sermons, capturing two-thirds of the Moscow market by 1886. His brand was reportedly a Tsar favorite. When Pyotr died, he was succeeded by his third son Vladimir Smirnov (1875–1939). The company flourished and produced more than 4 million cases of vodka per year.
View all Smirnoff 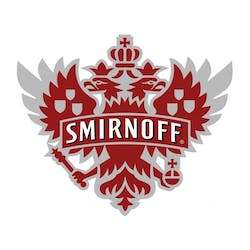