store shelf
Brand: Svedka
Category: Ready to Go Cocktails
Size: 4 Pack Cans (355mL)
Item ID: #45894
Location at store: 11a
Region: United States
Information
Questions
Size / Vintage Options
Reviews
Item Description
SVEDKA Tropics Raspberry Kiwi Vodka Tea Spritz Ready to Drink Cocktail combines delicious fruit flavors with real tea for a bold yet smooth taste that is refreshing and fruit-forward without being overly sweet. Made with real black tea and sparkling water, and featuring delicious, natural fruit flavors of tropical kiwi and juicy raspberry, this vodka tea spritz offers depth of flavor and a unique taste experience that sets it apart from other sweet tea vodka offerings. At 5.0% ABV, these canned vodka drinks are well-suited for casual occasions, offering party-portable convenience in a SVEDKA vodka drink 4 pack of 12 oz (355 mL) single serve vodka cans. Enjoy this can vodka cocktail poolside, while camping, after a long day of work, or poured into tropical cocktail glasses for a different take on afternoon tea. Cut loose on a hot day, mixing this delicious fruit and tea vodka with ice and blending to enjoy an Instagram-worthy ready made mixed drink vodka slushie.
About Svedka
THE SVEDKA STORY
SVEDKA Vodka has been making its mark since it was first imported in 1998. It's now the 2nd largest imported vodka and the #7 spirit brand in the United States*. And its popularity keeps growing.

HOW SVEDKA IS MADE
Continuous distillation -- a method first introduced in the 11th century -- creates ideal conditions for producing top-quality vodka. The "continuous" aspect of the distillation process insures that ingredients are constantly moving so the winter wheat, yeast and water never stalls or pools. At the final stage in this distillation process, SVEDKA is run through high-performance purification columns, five separate times to remove impurities. The end result is outstanding quality SVEDKA Vodka.
View all Svedka 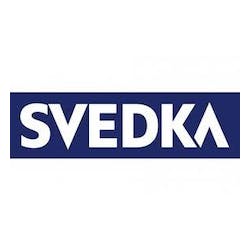