The Teeling 24 Year Old Single Malt Irish Whiskey was first distilled in 1991 and matured in Bourbon casks then allowed marry in Sauterne wine casks producing a wholly unique taste experience. The unique dual maturation imparts an extra depth of fruit flavours that perfectly complement the hint of smoke derived from the inclusion of a small portion of Peated malt as part of the original ingredients used in production.

View all from Teeling Whiskey 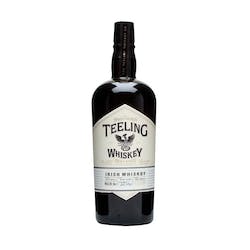 The distillery was established by Jack and Stephen Teeling, whose father John Teeling had founded the Cooley Distillery in 1987.The distillery is located in the Liberties area of Dublin, close to where Walter Teeling, an ancestor of the family had established a distillery on Marrowbone Lane in 1782. The symbol of the brand, a phoenix rising from a pot still, symbolises the re-establishment of the Teeling whiskey brand.