" Zyr vodka is a Russian, grain-based vodka that is one of the smoothest, finely crafted spirits I've had and it is one that vodka connoisseurs can appreciate to the fullest. This vodka has a well-defined theory behind it, one that obviously works, and it's based on a 9-5-3 formula. Nine filtrations, five distillations and three tastings ensure consistent, pure quality in every bottle. The formula seems to work and the result is an impressive vodka worthy of drinking anyway you like." ~ Distillery notes

View all from ZYR Vodka 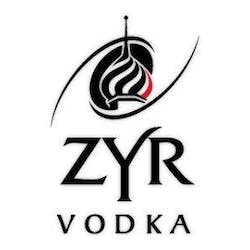 In Russia, the motherland of vodka, faery tales have been told over and over for centuries, highlighting the wealth of fantasy and imagination that fills the life of the Russian people. ZYR is the culmination of one of those faery tales. It's the idea that the drink is so pure and so enchanted you feel happy, satisfied, you've found your perfect happy ending. There is no need to search for something better. This is the faery tale taste ...

Among all other distilled spirits, vodka stands alone - it is the cleanest tasting, most versatile choice for sipping neat, on the rocks or in a ZYR Vodka Martini. The ZYR recipe is velvety smooth with a clean, fresh and slightly sweet finish. Like many of the world's other closely guarded formulas, ZYR is the result of select ingredients, recipe, process, controls and tradition. Because of ZYR's proprietary 9 • 5 • 3 formula and the highest criteria for only the best raw ingredients, vodka has never tasted so clean or felt so smooth, so creamy. Centuries of Russian vodka making traditions are integrated with the most innovative filtration and distillation technology available today. Only after this process is completed can the vodka be called ZYR.

ZYR starts with clean, naturally filtered water from Russia's North West, not far from the Finnish border. The water is then filtered five times in preparation for its marriage to the fermented blend of grains. After the five distillations of ZYR's mash, ZYR is filtered four more times using carefully selected birch tree charcoal granules to remove any remaining impurities and round out the taste.

The fermented blend of Russian winter wheat and rye is distilled five times. These stages ensure maximum clarity and purity in the product and in the incredibly clean taste. After these steps, ZYR is married to additional crystal-clear water, bringing the resulting spirit to 80-proof or 40% alcohol by volume. The procedures used for ZYR are based on the work of Dmitry Mendeleev, Russia's famous son of science and creator of the Periodic Table of Elements.

ZYR also undergoes three distinct tastings. The grain alcohol blend is tasted for flavor, the water for texture and the final ZYR for consistency against prior batches. These inspections ensure that every drop of ZYR is the perfect vodka in taste, texture, weight and color.

"Zyr goes down easily with a nice smooth finish at the end. Tastes great on ice but has enough substance when paired with mixers. However, I would recommend straight up with a twist of lemon or lime."