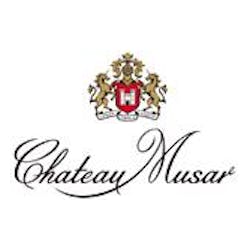 Chateau Musar was founded in 1930 by Gaston Hochar. In 1959, after studying oenology at the University of Bordeaux, his son Serge became winemaker. The civil war that tore Lebanon apart from 1975 to 1990 did not defeat Chateau Musar; Serge refused to abandon the wine, and lost only the 1976 and 1984 vintages to the war. Owing to his inspiring determination and grand passion for his wines, Serge received the inaugural "Man of the Year Award" from Decanter magazine in 1984. Recognition from Michael Broadbent, at the 1979 Bristol Wine Fair, threw Musar into the international spotlight and helped create a cult-like following. Chateau Musar is one of the most written-about and discussed wines in the world today.

Wine Advocate 91 The 2003 Chateau Musar seems very different than years such as 1981, but maybe that’s just because it is so young, or possibly

A silky Bordelais-like red wine from legendary Lebanese produce Ch. Musar. Made from 30 year old vines, this is often known as the "second wine"

Musar Jeune Red is an unoaked blend of Cinsault, Syrah and Cabernet Sauvignon from youthful Bekaa Valley vines. Meant for current consumption within a

The Hochar of this year is bright ruby red in colour with red fruits,plums, sloes and cherries on the nose and palate. This balanced and

Musar Jeune Red is an unoaked blend of Cinsault, Syrah and Cabernet Sauvignon from youthful Bekaa Valley vines. Meant for current consumption – within a

"Chateau Musar first started producing the Musar Jeune range of wines in 2006 from the fruit of low-yielding Bekaa Valley vines at around 1,000 meters

"The Musar Jeune Red 2014 is a blend of old vines Cinsault (45%), Syrah (45%) and Cabernet Sauvignon (10%) from organically certified vineyards, harvested during

"The vineyards of Chateau Musar are located in the Bekaa Valley and in Mount Barouk, around Kefraya and Aana, which is about a two-hour drive

"This is not the great, idiosyncratic, long-lived red of Chateau Musar. It’s a less expensive wine made to be drunk young. Even so, it’s really

Decanter 94 A challenging and unusual vintage in Lebanon has given this Musar additional Bordeaux style, with mulberries, cherry, spice and rounded tannins on the palate.

"2010 was a year to remember in Lebanese wine-making history. Snow fell only once on January 17th, and rainfall stopped on the February 23rd. March

"Chateau Musar’s youthful ‘Jeune’ wines are made from the fruit of Bekaa Valley vines at around 1,000m above sea level. Altitude keeps the average

Wine Enthusiast 90 " Gorgeous on the nose with a blast of fresh red fruit, violets and smoke, Musar’s Jeune is unabashed in its youth and

"The Chateau Musar ‘grand vin’ of this vintage is the traditional blend of Cabernet Sauvignon, Cinsault and Carignan – approximately one third of each. The

" Fresh and juicy, with a dried cherry aroma and flavors of berry, mineral and hints of iodine. Finishes with pepper and green olive notes.

Wine advocate 92 "The 2007 Chateau Musar, the flagship estate red, is the typical, roughly equal blend of Cabernet Sauvignon, Carignan and Cinsault, aged for 12

"A compelling wine with a nose and palate of orangeblossom, honey, wild flowers and tropical fruit notes of guava, banana and passion fruit. This well

A fascinating cult wine, found on the wine lists of most top restaurants. Bordeaux style, mixing Cabernet & Cinsault, and matured for 3 yrs in

Decanter Rating Four Stars "A blend of Cabernet Sauvignon, Cinsault and Carignan, Grenache and Mourvedre; the wine is aged 12-15 months in French oak and four