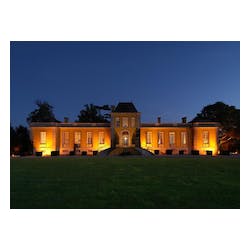 Chateau Lafon Rochet in St. Estephe dates back to the middle of the 17th century. The estate was founded In 1650, when Antoinette de Guillemotte, brought the land of Rochette as her dowry to her husband, Pierre de Lafon. Pierre de Lafon was well-known in the region as he was a member of the Bordeaux Parliament. Shortly after they were married, following the custom of the day, taking the family name the property was renamed, Chateau Lafon Rochet and a new estate was born. While many Bordeaux vineyards were confiscated during the French Revolution, that did not happen to Lafon Rochet. In fact, the Left Bank estate remained the property of the same family for more than two centuries. In 1880, Madame Lafon de Camarsac died. Her death caused Lafon Rochet to fall into disrepair. That all changed in 1959 when the Tesseron family purchased the estate and completely renovated Lafon Rochet from top to bottom. This was something that had to be done as most of the original buildings were in such bad shape, they could no longer be used. The vineyard also needed extensive replanting. At the time of the purchase, the vineyard was only 17 hectares. Through replanting and subsequent purchases, the estate has more than doubled in size since the Tesseron family took control of the property. That marked the start of the modern era for Chateau Lafon Rochet.

Wine Enthusiast 93 "Big-hearted fruit dominates this smooth wine. The estate, owned by the Tesseron family and close to their other property of Pontet-Canet, is performing

Wine Enthusiast 94 "This wine has richness, weight and dark tannins, with balanced fruit and a ripe mouthfeel. It's powered by spice and blackberry flavors." ~R.V.

Wine Spectator 88 "Beautiful aromas of crushed berries and hints of spices. Medium- to full-bodied, with fine tannins and a fresh, clean finish. Long and caressing.