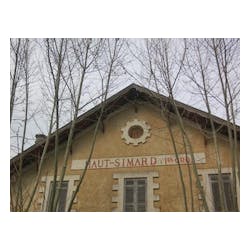 With a legacy that dates back to the 17th century, Château Simard is located near the ancient and beautiful town of Saint-Émilion,home to the Right Bank’s most prestigious estates. Among the most renowned of these is Château Ausone — one of only twoproperties classified in 1955 as Saint-Émilion Premiers Grands Crus Classés A. Château Ausone’s proprietor, Alain Vauthier, inheritedChâteau Simard in 2008 when his uncle, Claude “Coco” Mazière, passed away. The château has been in the family since 1954.A quintessential Saint-Émilion producer, Château Simard’s vineyard is surrounded by the region’s first-growth vineyards. The40-hectare (98.84-acre) gently sloping vineyard is marked by predominantly clay soil mixed with sand and gravel, and a deep watertable, forcing the vines to grow far into the ground. It is planted to Merlot and Cabernet Franc vines that average 35 years in age. Thevineyard manager is Laurent Vallet. Pauline Vauthier is the general manager.

The nose has hints of berries, violets and earth. In the mouth, flavors of cassis, black cherry and plum expand within a good, round structure;

Wine Spectator 89 "Surprisingly good for the vintage. Fresh mushroom, tobacco and berry aromas follow through to a full body, with an aftertaste of stone and

"Chateau Simard is produced from a 40 hectare parcel and the wine does not see any new oak for the aging. Instead, the wine of

Steeped in history, Chateau Simard has long intrigued Bordeaux fans. Originally owned by Count Simard, the vineyard was once a larger parcel. Then in 1870,