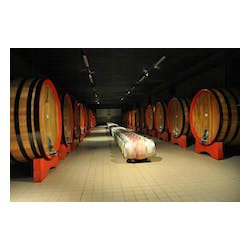 Brother-and-sister team Paolo and Lucia Bianchini continue to make excellent Brunellos in the tradition of their father, Giuseppe, who died in 2004. They are better employing their new modern cellars, which were completed last year, and continue to maintain their south-facing vineyards at near pristine levels. The Brunellos emphasize finesse and balance, with layers of ultrafine tannins and subtle ripe fruit, yet they age incredibly well. The Bianchini family was gifted its Brunello estate in 1985 by Countess Elda Ciacci Piccolomini d'Aragona, who had no heirs; Giuseppe had been the estate manager." -- The Wine Spectator, July 31, 2007 Ciacci Piccolmini is one of the most sought-after producers in all of Italy. This ancient estate has 35 hectares of superior holdings in the prized Castelnuovo dell'Abate zone, including the "Pianrosso" vineyard (from which the best grapes are selected for the Brunello di Montalcino) and the "Fonte" vineyard, which produces grapes for the Rosso di Montalcino. Plantings of Syrah, Cabernet, and Merlot are to the south, where the Orcia river provides a milder microclimate. The non-traditional wines are as exciting as the Brunello and Rosso: "Ateo," which means "atheist", is a statement against the restrictive laws that govern winemaking in Italy; the wine is a blend of Sangiovese, Cabernet Sauvignon and Merlot, and received 90 pts from Parker for the 2003 vintage. 100% Syrah "Fabius" is one of the greatest expressions of that varietal in Italy: Parker once called it "the finest Italian Syrah I have tasted." Vineyard Management: Although the estate is not certified, the guidelines of organic agriculture are followed. Only sulfur- and copper-based products are used. The area is sheltered by Mount Amiata and enjoys excellent air circulation. Only organic fertilizers are used (there is a cattle farm nearby for manure). The soil between the rows of vines is tilled and no herbicides are used. Minimum dosages of SO2 is used in the wines. Farming Practice: Practicing Organic

Wine Enthusiast 95 "This full-bodied red starts off with aromas of leather, forest floor and camphor. Enveloping and structured, the palate shows a weightless concentration, featuring

James Suckling 100 "The opulence of fruit and complexity of earth, meat, mushroom and cedar is breathtaking. Its full-bodied, deep and powerful with so much intensity

Wine Spectator 98 "Both fluid and concentrated at once, this exudes cherry, black currant, violet and mineral aromas and flavors. Saturated with ripe fruit, this has

Wine Enthusiast 92 Editor's Choice "Vibrant and delicious, this textbook Rosso has enticing aromas of woodland berry, rose, tobacco and a whiff of eucalyptus. On the smooth,

Wine Enthusiast 97 "Red-berry, wild-rose, crushed mint and dark-spice aromas are front and center on this fragrant red. The full-bodied palate is concentrated but also boasts

Wine Enthusiast 97 "Red-berry, wild-rose, crushed mint and dark-spice aromas are front and center on this fragrant red. The full-bodied palate is concentrated but also boasts

Wine Advocate 98 "The Ciacci Piccolomini d'Aragona 2016 Brunello di Montalcino Pianrosso is a single-vineyard expression that draws its fruit from an 11.7-hectare parcel with moderately

Wine Spectator 91 "A harmonious style, whose graceful frame is enhanced by strawberry, cherry, graphite and tobacco flavors. Intense and long, with plenty of energy on

James Suckling 98 "Extremely perfumed and decadent with dried flowers and spices and fresh mushrooms. Cherries,too. Full body. Solid core of fruit, yet ever so fine

James Suckling 100 "Lots of ripe and rich fruit with a decadent undertone of meat and spice that turns to pure fruit and licorice. Medium to

James Suckling 98 "Extremely perfumed and decadent with dried flowers and spices and fresh mushrooms. Cherries,too. Full body. Solid core of fruit, yet ever so fine

Vinous Media 89 "Although a bit lighter than it often is, Ciacci's 2014 Rosso di Montalcino is soft, supple and open-knit, all qualities that make it

Wine Spectator 96 "Exuding cherry, strawberry, floral and tobacco aromas and flavors, this effusive, fruity style is bright and elegant, with terrific harmony and a long,

Wine Spectator 90 "A rich style, with cherry and plum flavors set against a vibrant structure. The dense tannins emerge on the moderately long finish. Drink

" Created as a statement against Italy’s restrictive wine making laws in 1989, the wine of the “Atheist” has remained the same even though Italy’s

Wine Spectator 96 "Exuding cherry, strawberry, floral and tobacco aromas and flavors, this effusive, fruity style is bright and elegant, with terrific harmony and a long,