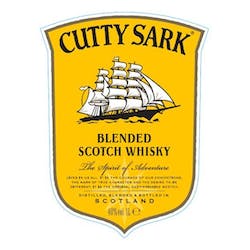 Cutty Sark is a range of blended Scotch whisky produced by Edrington plc of Glasgow, whose main office is less than 10 miles (16 kilometres) from the birthplace of the famous clipper ship of the same name. The whisky was created on March 23, 1923 as a product of Berry Brothers & Rudd, with the home of the blend considered to be at The Glenrothes distillery in the Speyside region of Scotland. The name comes from the River Clyde–built clipper ship Cutty Sark, whose name came from the Scots language term "cutty-sark", the short shirt [skirt] prominently mentioned in the famous poem by Robert Burns, "Tam o' Shanter". The drawing of the clipper ship Cutty Sark on the label of the whisky bottles is a work of the Swedish artist Carl Georg August Wallin. He was a mariner painter, and this is probably his most famous ship painting. This drawing has been on the whisky bottles since 1955. The Tall Ships' Races for large sailing ships were originally known as The Cutty Sark Tall Ships' Races, under the terms of sponsorship by the whisky brand

" Released 90 years after the end of the era which it celebrates, Cutty Sark Prohibition Edition has been crafted as a salute to the

Wine Enthusiast 89 "Outside of the green glass bottle, this Speyside blend is a soft, light gold. Toffee dominates the aroma, with a little smoke and

" Released 90 years after the end of the era which it celebrates, Cutty Sark Prohibition Edition has been crafted as a salute to the