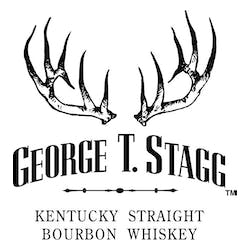 2019 release "This barrel-proof bourbon packs a potent blast of vanilla, sweet tobacco and campfire while behind the drama a pleasantly understated mineral quality helps the

Ultimate Spirits Challenge 98 (2019) Chairman's Trophy (2019) Extraordinary,Ultimate Recommendation "This barrel-proof bourbon packs a potent blast of vanilla, sweet tobacco and campfire while behind the drama a

" The nose this bourbon is intense! The aromas are complex. At first it is easy to pick up on cinnamon tones as well as

" This extremely hearty whiskey ages in new charred oak barrels for no less than 15 years. Straight out of the barrel, uncut and unfiltered,

"George T. Stagg built the most dominant American distillery of the 19th century, during a time known as the Gilded Age of Bourbon. Uncut and

George T. Stagg Bourbon (Fall 2020) is an uncut, unfiltered Kentucky Straight Bourbon Whiskey and is one of the five bottlings in the Buffalo Trace

" Uncut and unfiltered, this robust bourbon whiskey ages for nearly a decade and boasts the bold character that is reminiscent of the man himself.

"Strong and bold. Right away theres a prominent showing of oak and vanilla. A touch of that dusty warehouse comes through, and then

This whiskey is produced at the scenic Buffalo Trace Distillery in Frankfort. This is not a single barrel but a small batch from the mixing

"George T. Stagg built the most dominant American distillery of the 19th century, during a time known as the Gilded Age of Bourbon. Uncut and

"The palate tells you that this is a complex and refined bourbon. Big, spice up front, cinnamon. As it rolls down the tongue you are

Stagg Jr. Barrel Proof Bourbon Batch 13 from Buffalo Trace is bottled at 128.4 proof. The bourbon is uncut and unfiltered, and is matured for