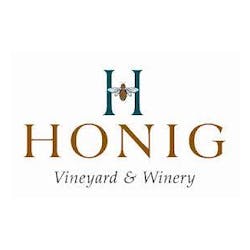 The Honig Story In 1964, Louis Honig purchased a 68-acre ranch in Rutherford, in the heart of the Napa Valley. The vineyard was planted with Sauvignon Blanc and Cabernet Sauvignon grapes, which he sold to neighboring wineries. Louis worked to create a family gathering place at the ranch, for his children and grandchildren, while he dreamed of the day he could retire from his San Francisco advertising agency and make wine from his vineyard.Louis passed away before he could realize his dream, leaving the estate to his family. In 1981, as a tribute to his legacy, his family produced a few hundred cases of Louis Honig Sauvignon Blanc in the vineyard's old tractor barn.After the wine won a Gold Medal at the Orange County Fair, the family decided to increase production, and Honig Vineyard & Winery was born. In 1984, at the age of 22, grandson Michael Honig took over management of the vineyard and winery. In 1989 the family began producing small amounts of Cabernet Sauvignon. As the business grew, family members Regina Weinstein, Steven Honig, and Stephanie Honig joined Michael in the wineryThe Honig family are leaders in sustainability, both in the vineyard and the winery, and what began as a small "garage" winery has today become a successful family enterprise, with everyone working collaboratively to run an inspiring and socially responsible business. Winemaker Kristin Belair focuses production solely on Sauvignon Blanc and Cabernet Sauvignon, and Honig wines can be found on the wine lists across the country. Louis Honig's vision of bringing his family together to share in the beauty and bounty of Napa Valley, while producing outstanding wines, has become a reality.

James Suckling 92 "A very aromatic red, offering baking spices, such as cinnamon, cloves and anisette, as well as notes of ripe blackcurrants, plums and dark

Wilfred Wong 92 "The 2021 Honig Sauvignon Blanc is firm on the palate with a fine, bright finish. TASTING NOTES: This wine delivers aromas and flavors

"A pale straw wine with medium-body, full acidity, and straightforward fruit flavors. Mildly oaked, showing herbs and citrus on the palate. Nice aromas and a

Wilfred Wong 92 "The 2019 Sauvignon Blanc is an outstanding effort. This wine is true-to-type. Its stylish aromas and flavors of ripe melon, dried herbs, and

"The fruit for this wine comes from our sustainably farmed vineyard in Rutherford, as well as other nearby vineyards. Bright, crisp nd fresh. The flavors

Wine Spectator 89 "Grapefruit, lime and lemon zest flavors are crisp and elegant, with a pretty note of chamomile on the finish. Drink now. (5/31/17)" Producer

James Suckling 92 "The blueberry and dark-chocolate aromas are very attractive and follow through to a full body, round and juicy tannins and a hazelnut aftertaste.

Bright acidity lends a crisp freshness to the flavors of peach, passionfruit, and lemongrass, artfully balanced by a touch of freshly squeezed grapefruit and lime.

Bright blackberry, red plum, and raspberry fruit with notes of cranberry, black tea, spice and coriander seed. Luscious and balanced, with toasty oak and a

"Perfectly balanced grapefruit and melon aromas and flavors are accented by lime and mango. A round mid-palate is followed by a vibrant, crisp, lingering finish."

"Perfectly balanced grapefruit and melon aromas and flavors are accented by lime and mango. A round mid-palate is followed by a vibrant, crisp, lingering finish. Zippy

"Honig's Napa Valley Cabernet Sauvignon is sourced from their sustainably farmed Rutherford estate vineyard, with some additional fruit coming from around the valley. It is

"Perfectly balanced grapefruit and melon aromas and flavors are accented by lime and mango. A round mid-palate is followed by a vibrant, crisp, lingering finish. Zippy

"Honig's Napa Valley Cabernet Sauvignon is sourced from their sustainably farmed Rutherford estate vineyard, with some additional fruit coming from around the valley. It is

" An elegant, balanced Cabernet with flavors of black cherry, plum, and black tea, and hints of nutmeg, allspice, cassis, vanilla, and anise. The broad

"Perfectly balanced grapefruit and melon aromas and flavors are accented by lime and mango. A round mid-palate is followed by a vibrant, crisp, lingering finish."

Wine Advocate 88 " The 2009 Cabernet Sauvignon is a pretty, mid-weight offering. Sweet, dark fruit spices, French oak and licorice are some of the notes

Wine Spectator 91 "Firm and well-structured, delivering a tight, focused core of mineral, dried berry, spicy mocha, cedar and oak. But what's most impressive is the

"A luscious nectar with the taste of honey, white figs and just the right amount of acidity with a viscous, rich texture." ~Winery Notes