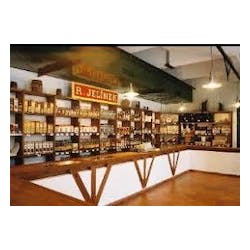 Throughout Central Europe, brandy produced from plums (slivovitz) has been popular for centuries and R. Jelinek has always been at the center. While traveling in Bohemia and if you were to inquire about R. Jelinek, the response would generally be ah, you mean the plum people. The point being that plums and Jelinek are one and the same. For generations we have been refining the formula of the process which produces this delicious product. Start with plums grown in our region, together with our triple distillation process and the patient aging process which takes a minimum of five years and the result is a plum brandy (slivovitz) of exceptional flavor and smooth taste. The real treasure of our cellars is the ten year old Gold slivovitz. This product has been produced from only the best assortment of hand selected late-harvested plums and then using the same traditional production methods that have been used in Bohemia for over a hundred years. The plum flavored vodka was a product destined to be born. Our tasting team selected the final product from over two hundred sample specimens. The bottle design was a great deal of fun to create; mixing the new together with the traditional.

"The plum flavored vodka made from grain neutral spirits and all natural plum flavor exceeds all expectations with its pleasant aroma and exceptionally smooth taste.

" Until recently, Silver Slivovitz had been intended for the American market, now it can also be bought in the Czech Republic and in other