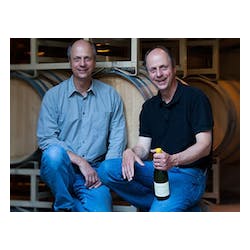 "At the core of Foxglove is Bob Varner, also the winemaker at Varner Wines. Beginning with their first vintage in 1991, Bob sources the wine from a variety of places, all of which are in Edna Valley. The resulting wine has Central Coast appellation pricing, and is full of complex fruit flavors that the Edna Valley appellation is known for. Edna Valley, a relatively small appellation, grows mostly Chardonnay on about 1000 acres. The entire acreage is tightly controlled by a few owners employing the most up-to-date vineyard practices that give the valley impressive evenness. Located just south of San Luis Obispo, its vineyards are some of California's closest to the Pacific Ocean. Mild winters, cool, foggy summer, and clay-loam soils produce a combination of flavors that have been described as "textbook Central Coast."

NEW YORK TIMES IN TRYING TIMES, 20 WINES UNDER 20 THAT REVIVE AND RESTORE "I've written about an older vintage of this wine, but as I've

Vinous Media 89 "The 2018 Cabernet Sauvignon Paso Robles shows just how appealing the vintage is. Aging in steel and bottling early brings out the aromatic,

Vinous Media 89 "Foxglove's 2017 Cabernet Sauvignon is gorgeous. Even better, it is also one of the very best values in California Cabernet readers will come

Vinous Media 91 "The 2016 Chardonnay is fabulous. In this vintage, the Chardonnay is especially broad, with plenty of tropically leaning fruit, peach and apricot flavors.

"The Foxglove Cabernet over delivers for the price point. Dark, lush red and black fruits intermingle with earth and spice. Juicy forward texture is balanced

NEW YORK TIMES IN TRYING TIMES, 20 WINES UNDER 20 THAT REVIVE AND RESTORE "Ive written about an older vintage of this wine, but as Ive

"The Foxglove Cabernet over delivers for the price point. Dark, lush red and black fruits intermingle with earth and spice. Juicy forward texture is balanced

New York Times Top 20 Winter Wines Under $20 "For a world that’s gotten used to jammy, ultraripe Zinfandel, this is a refresher course reminding us

New York Times Top 20 Under $20 "Foxglove is the value label from Varner, which makes excellent wines in the Santa Cruz Mountains. This is rich,

Vinous Media 89 "The 2014 Zinfandel is another delicious, value-priced red from the Varner brothers. Pinot-influenced aromatics meld into a core of sweet red berry fruit.

Vinous Media 89 "The 2013 Chardonnay is a fabulous wine for the money. Lemon oil, white flowers and white pepper are all laced together in an

Antonio Galloni 89 "The 2012 Zinfandel is gorgeous. Sweet red berries, leather, mint, tobacco and cedar are some of the notes that emerge from the glass

Antonio Galloni 89 "Lemon oil, white flowers, mint and slate meld together in the 2012 Chardonnay. Racy and beautifully layered on the palate, this tank-fermented, non-malo

Wine Advocate 91 "The 2011 Chardonnay is a beauty, as well as an absurd value. Very clean and lively, with classic Chardonnay notes of juiced apple,

Wine Advocate 90 "The 2010 Chardonnay is one of the top values in California wine. It possesses tons of ripe, varietal fruit in a style that

Wine Advocate 88 "The 2010 Zinfandel is a ridiculously fine wine for the money. It bursts from the glass with rich dark fruit, mocha, spices and

Wine Advocate 89 "The 2010 Cabernet Sauvignon wafts from the glass with sweet red cherries, flowers and mint. This is a decidedly restrained style of Cabernet,

James Suckling 91 "Wine with polished tannins and plenty of currants, dried fruits and spices. Full and silky. Give it two to three years to open