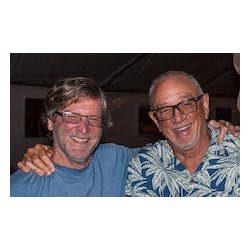 Bill Wathen and Dick Doré have been making wine together since 1985, when they founded Foxen Winery & Vineyard at the historic Rancho Tinaquaic in Northern Santa Barbara County. Since that time their dedication has remained the same: the creation of small production, sustainably-farmed, vineyard-focused wines using a straightforward and minimalist approach to winemaking. The winery is named in memory of William Benjamin Foxen, and English sea captain and Dick's great-great grandfather. Benjamin Foxen came to Santa Barbara in the early 1800's and purchased the historic Rancho Tinaquaic in 1837 with a Mexican Land Grant that totaled nearly 9000 acres, that comprised most of what is now known as Foxen Canyon. Captain Foxen adopted the distinctive anchor as his ranch cattle brand, which became the trademark of the Foxen Vineyard & Winery. We are proud that we have made our home on the now 2000-acre Rancho Tinaquaic, which remains in family hands.

Wine Enthusiast 91 Lighter in the glass, this appellation blend shows pomegranate sorbet, cranberry skins, rose petals and wild herbs on the nose. The palate is

Wine Advocate 92 “Pale to medium ruby-purple colored, the 2015 Pinot Noir is scented of violets, cinnamon stick and Ceylon tea over a core of red

Wine Spectator 92 "Elegant and graceful, but not shy on intensity. Polished, with sarsaparilla, vanilla and bramble notes to the core of lush, juicy raspberry and

Wine Enthusiast 94 Delicious aromas of ripe cherry pie and black cardamom are quite sexy. The palate is far more complicated and layered, with the

International Wine Cellar 90 "Silky and seamless in texture, offering gently sweet raspberry and cherry flavors and a touch of florality. Closes silky and long, with

" Not a sledgehammer style, this Barossa Shiraz is made for drinking! Soft, slurpy and textured it is balanced with good acidity, which refreshes the

"This 3-acre vineyard in the heart of the Santa Maria Bench was planted 43 years ago, and was named after Dick’s great uncle, Ernesto Wickenden.

International Wine Cellar 90 "Aged for 22 months in French oak, 80% of it new: Opaque ruby. Oak-spiced cherry and cassis on the nose, along with

Wine Spectator 88 "Intense and vibrant, with spicy cola, blackberry and boysenberry flavors that are fresh and complex. Nicely tapered finish. Drink now through 2008. 1,190