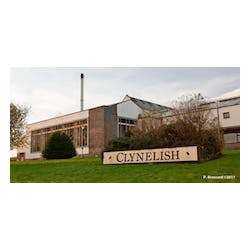 Clynelish Distillery is a distillery near Brora, Sutherland in the Highlands of Scotland. The distillery was built in 1968, adjacent to the original Clynelish distillery which was closed. Confusingly the original distillery was reopened in May 1969 and until July 1973 produced a heavily peated whisky to supply for blending; this was done to cover a shortage of Islay whisky caused by a drought on the island (while taking the Manager's Tour of the distillery in September 2015, I was told that this was due to the Caol Ila distillery being re-built from scratch, and therefore to compensate the lack of Caol Ila for blending during a couple of years). The old distillery was renamed Brora Distillery and production of a peated spirit continued until 1983. Clynelish has had a strong connection with Johnnie Walker blended whisky for many years. A large proportion of the spirit used in Johnnie Walker Gold Label Reserve comes from this distillery.

Wine Enthusiast 90 - 95 BEST BUY "The initial aroma is large, biscuity and grainy sweet; the aroma then becomes more sugar biscuit-like and a touch