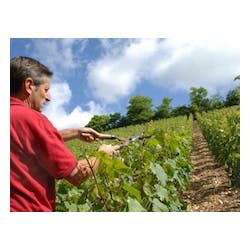 "Located in the village of Chichée, southeast of Chablis proper, the Picq family has farmed its small collection of vines for several generations. Today, the estate is in the deft hands of Gilbert's two sons Didier and Pascal, and his daughter Marilyn Picq, each with their defined roles: Pascal is in the vines, Didier is in the cellar, and Marilyn manages the business. The Picq style of Chablis is classic, with the inimitable expression of minerality that the chardonnay only picks up in these rolling hillside vineyards of the Yonne Valley, coupled with racy acidity and fine depth that comes with low yields, meticulous winemaking and fine parcels of vines. The wines are naturally fermented and raised in stainless steel tanks to protect the underlying expressions of terroir. You won't find a single stave of wood in the entire winery. Pascal Picq does severe pruning each winter and routinely thins the crop twice in the summer months. The serious work in the vineyards can be felt immediately in the Picq wines, as even the Chablis villages and the old vine cuvée offer up a depth and intensity of flavor in the mid-palates that is most often associated with at least premier cru level wines. The estate does not own a large spread of vineyards, which may also account for the exceptional quality of their Chablis AC bottling. Didier feels it serves as the calling card for the domaine, and thus, gives it a great deal of attention. It is both an exceptional value and among of the finest examples to be found in the appellation, with the structure and cut to age gracefully for up to twenty years. Next in the lineup is the Vieilles Vignes bottling made from the oldest parcels of vines in their village wine holdings (more than fifty years of age). It is a deep, rock solid and racy example of Chablis, with a minerally-infused personality and great purity of fruit, and a brisk acidity that allows it to age gracefully for fifteen to twenty-five years in top vintagse. It is easily the quality equivalent of a top premier cru. Domaine Gilbert Picq et Ses Fils also offers up a pair of fine premier crus, both located in the village of Chichée. These include a beautifully pure and complex bottling of Vaucoupin, one of the very underrated premier crus in Chablis, and a more powerful, but equally soil-driven premier cru of Vosgros, which is produced from the family's oldest premier cru vines. Vaucoupin lies to the northeast of the village of Chichée on a slope that overlooks the Serein River and faces primarily due south. The Picq parcel is in the steepest section of the vineyard, on a forty-five degree slope and must be completely tended by hand, including at the all important harvesting time. It is a beautifully situated premier cru, which produces a wine with a lovely chalky, oyster shell base of soil, and notes of spring flowers and beeswax augmenting the lovely tart citrus core of fruit. The premier cru of Vosgros lies to the west of the village, on a slope that also includes the premier cru vineyard of Vaugiraut, and has a more varied exposure that generally faces east. The Vosgros vines were planted in the 1980s and tend to produce a beautifully tensile and complex Chablis that starts out life with a youthful austerity, but unfolds brilliantly with bottle age to deliver a racy, complex and minerally expression of Chablis. It is the longest-lived wine in the Picqs' fine portfolio of wines. Didier Picq is deeply respected by his peers in the region and always makes himself available to fellow vignerons, especially the youth of the region. He exudes endless love for wine and is a truly positive force in the world of wine. We are honored to work with him and his siblings."

Vinous Media 94 "The 2019 Chablis "Dessus La Carrière" comes from vines over 50 years old. It has an intense wet limestone and oyster shell bouquet

Vinous Media 92 "The 2019 Chablis Village was tasted both separately and as a blend so that Didier Picq could show the different terroirs: limestone, clay

Vinous Media 95 "The 2019 Chablis Vosgros comes from vines planted in the early 1960s and in 1986. The nose sports a very subtle but beneficial

Vinous Media 90 “The 2018 Chablis is a gorgeous wine. Floral, bright and delineated with terrific precision, the 2018 is an absolutely village-level wine. Apricot, spice

Vinous Media 91 "The 2017 Chablis was blended the week before my visit and is sampled directly from stainless steel vat. None of the parcels were

Vinous Media 93 "The 2017 Chablis Dessus la Carrière, which comes from two parcels and was not produced in 2016 due to frost, offers beeswax and

Wine Advocate 88 "The 2016 Chablis appeared quite lucid in color with strong green tints. The nose is well defined with touches of wild honey that

Wine Advocate 93 "The 2015 Chablis Dessus la Carriere, always the first to be picked, has a clean and precise bouquet with hints of fresh lime

Wine Advocate 93 "The 2015 Chablis Dessus la Carriere, always the first to be picked, has a clean and precise bouquet with hints of fresh lime

Wine Advocate 94 "The 2015 Chablis 1Er Cru Vosgros, which tends to be the most reductive of Picq's cuvées, was indeed quite closed down on the

Wine Advocate 93 "The 2014 Chablis En Vaudécorse returns after an absence in 2013. It's a small parcel close to Vaucopain on pure Kimmeridgian soils. This

Wine Advocate 92 "The 2014 Chablis Vieilles Vignes was picked right in the middle of Picq's harvest, from 60+-year-old vines. It has a fragrant, slightly floral

Allen Meadows Burghound 90 "A ripe and fresh nose displays notes of dried yellow orchard fruit that flirt with a discreet exoticism. The textured and agreeably

Wine Advocate 89-90 "Tasted separately - and as a pre-assemblage - from five tanks originating with different parcels and pickings, Picq's 2012 Chablis is bursting with

Allen Meadows Burghound 89-92 "OUTSTANDING TOP VALUE. Like the old vines cuvée, the nose immediately signals that this could be nothing other than from Chablis with

Stephen Tanzer 89 "Good pale yellow with green highlights. Steely aromas of lemon, orange zest and anise. Supple and quite rich, but with good nervosite to