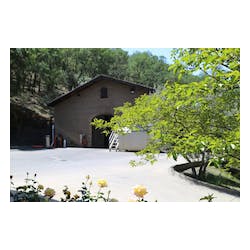 Begun in 1992 by Bruce and Barbara Neyers and their winemaking partner, Ehren Jordan, Neyers Vineyards produces 15,000 cases of wine annually. They rely primarily on Merlot, Cabernet Franc and Cabernet Sauvignon grown on the Neyers' 50-acre Conn Valley ranch farmed by Hugo and Lupe Maldonado. Additioanl grapes are purchased from a select group of growers, several of which are identified on the labels of wines produced from grapes they have grown. In 1999 Neyers purchased the 30-acre Sage Canyon Winery in the foothills east of Rutherford and have developed that facility for their entire production that also includes Syrah, Grenache, Zinfandel and Chardonnay.

“The grapes are whole-cluster pressed, and fermentation was carried out in a mixture of new and used French oak barrels, using native, wild yeast, and

“I'm sure it would please the late Lucien Peyraud to see that this grape variety has established a toehold with American wine drinkers. Lucien was

“The Carneros District Chardonnay comes from three vineyards planted to 'Shot-Wente' selection. All are in the cool-weather area of Carneros, near the San Francisco Bay.

Tadeo and I first visited the Mourvèdre vineyard planted by Greg Adams at the old Rossi Vineyard in the central Sonoma highlands. The new owner

Wine Enthusiast 90 "This is a luxuriously layered and complex white. It's an expertly rendered combination of ripe, rich fruit—most notably spicy apple and pear—that's completely

"The 2013 vintage was great for Chardonnay, giving us long, sunny days with mild temperatures that retained the fruit's natural acidity. Our fermentation was carried

"There's no great secret about what we do with Chardonnay at Neyers Vineyards: we rely on traditional French winemaking practices that in most instances have

Wine Spectator 93 "Notably rich and creamy, yet elegant and refined, this Chardonnay delivers a supple, fleshy beam of white peach, nectarine and fresh-cut flowers, with

Robert Parker 90 "The 2006 Chardonnay Carneros has a nice, smoky nose of hazelnuts, honeyed citrus, and a touch of tropical fruits in a medium to

Wine Spectator 92 "Ripe and robust, intense and concentrated, with a full-bodied mix of black cherry, plum, dusty berry, mineral, anise and sage. This is focused,