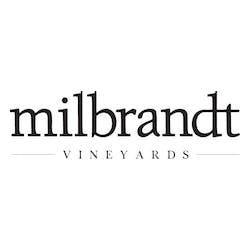 Milbrandt Vineyards was founded in 1997 by Butch and Jerry Milbrandt. Building on four generations of farming heritage, Butch and Jerry took a leap from potato and apple farming to grow world-class vineyards, and ultimately opened a winery. Pioneers of the Columbia Valley wine regions, Butch and Jerry saw potential in the land and resources of Eastern Washington. They took a risk in planting grapes and soon became recognized for helping establish two of the top AVAs in the state: Ancient Lakes and Wahluke Slope. Be it innovation, determination, or sheer grit, the Milbrandts have never shied away from a challenge and that persistence is reflected in the quality of their wines. Now a multi-generation owned and operated family winery, Milbrandt Vineyards remains a symbol of perseverance and reward. The wines are crafted to be enjoyed on any occasion, whether it's following a long day's work or a once in a lifetime celebration. The Milbrandt Family brings an adventurous spirit and lifestyle to winemaking that is captured in each bottle. They are bold, innovative and fun; removing the stigma premium wines are often associated with and creating an opportunity for all to connect and participate. Influenced by the regions hot, arid summers and cool, crisp evenings, Milbrandt wines embody the pioneering spirit of the Milbrandt brothers and are brought to life through the technical skill of winemaker Joshua Maloney and his team. A craftsman by nature and chemist by degree, Joshua Maloney, joined the winery in August 2011 with nearly 20 years of winemaking experience and has led Milbrandt to be recognized among the top wineries in Washington. The Milbrandt winemaking team's scientific precision and artisanal approach capture the spirit and lifestyle of the Wahluke Slope and Ancient Lakes terroir to create incomparable wines. Joshua and his team consistently craft 90-plus point single vineyard and estate wines and view each bottle as a work of art.

Wine Enthusiast 90 The aromas are direct and appealing, with notes of pear, yellow apple and spice. Stone and tropical fruit flavors follow. The flavors are

93.2% Chardonnay, 6.8% Sauvignon Blanc Bright aromas of fresh apple, pear, and tropical fruit on the nose. The mouthfeel is round, soft, and clean with a

This wine delights with floral notes of lilies and lemon zest on the nose. Apple and pear on the palate, accented by hints of vanilla

James Suckling 91 "This wine delights with floral notes of lilies and lemon zest on the nose and apple and pear on the palate. Accented by

"The 2014 Traditions Cabernet Sauvignon is smooth and rich with classic aromas of blackberries, plums, dried savory herbs, and hints of espresso. This wine is

Wine Spectator 90 "Taut, focused and tangy, with lemon and grapefruit notes weaving through the apple and pear flavors, lingering on the finish with a hint

Wine Spectator 90 "Bright, spicy and polished, with pretty pear and floral flavors under a cloud of clove and green peppercorn, lingering with freshness and vibrancy.

"Our Traditions Riesling is made in a refreshing, off-dry style with aromas and flavors of sweet Elberta peach, ripe Granny Smith apple and zesty Key

" 89% Merlot, 8% Malbec, 3% Petit Verdot Our 2012 Merlot is round and rich with classic aromas and flavors of blackberry, plum, hints of mocha

Wine Spectator 90 "Dark and spicy, with blackberry fruit playing against mocha and black pepper notes, coming together smoothly on the enticing finish. This has presence

"Our 2011 Cabernet Sauvignon is smooth and rich with velvety and complex tannins layered with flavors of dark cherry, blackberry, cassis, mocha, and a hint

Wine Spectator 90 "It is dark, harmonious and complex with black cherry, plum, cassis, vanilla, spicy oak, chocolate, dried herbs and a whiff of mint. While

"Our 2008 Traditions Merlot is elegant, balanced and approachable. The nose is bright and forward with cherries, berries and plums wrapped in brown sugar. The flavors

"Riesling is on fire. No variety is more versatile or enjoyable than Riesling. It goes with seafood, chicken, turkey and pork and a wide swath

Robert Parker 92+ "The 2007 Sentinel Red is the Milbrandt flagship. It is composed of 63% Cabernet Sauvignon, 25% Merlot, with the balance Petit Verdot and