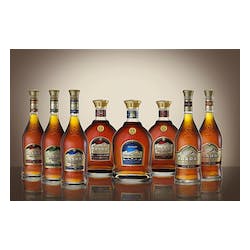 Armenian brandy production was started in 1887 in Yerevan by the merchant and philanthropist Nerses Tairyan, who was the first to introduce classic French alcohol production technology in his factory. He was inspired by his cousin, Vasily Tairov, who was an experienced winemaker and scientist. Nobody else recognised as well as he did nature's gift – the unique conditions of Ararat Valley and the high-quality of the local grapes. With financial support from friends and relatives, production was fitted with Charante Type distillers and the premises were equipped for ageing spirits. Their entrepreneurial instinct did not fail the brothers, their undertaking became a technological breakthrough and opened new prospects for the brandy business in Armenia.W

" Ararat 5 Star Brandy is aged for five years. Tender and refreshing plum, peach and dried fruit aroma with a touch of bitter chocolate.

" Ararat , has a fresh young taste , releasing pleasant hazelnut aromas in the mouth. Its organoleptic qualities make ArArAt an ideal