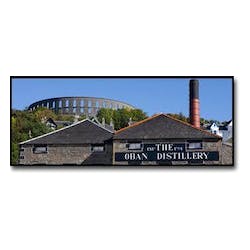 The distillery was built in 1794 by the brothers John and Hugh Stevenson and operated by them until 1866, when it was bought by Peter Curnstie. It was then acquired by Walter Higgin in 1883 and rebuilt. In 1898, Alexander Edward, who also owned Aultmore Distillery, bought out Higgin. In its first year of operation, it suffered major losses when a major blending company, Pattison's of Leith, went under. In 1923, Oban was sold to Dewars and joined Distillers Company with that company in 1925. It fell silent from 1931 until 1937 and again from 1969 to 1972 when a new still house was built. In 1989 a new visitors' centre was installed.

Wine Enthusiast 85-89 "The early aroma is a combination of malt, wood and sea breeze; the later bouquet is a deliciously harmonious, even creamy marriage of

" After moving with their widowed mother to the small port city of Oban (situated in northwest Scotland), John and Hugh Stevenson took jobs building