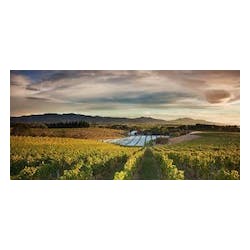 Almost since its inception, Dog Point has been recognized as among the very top (arguably the very top) wine producers in New Zealand. Their two very different Sauvignon Blancs, their Pinot Noir, and their Chardonnay are all wines of astounding quality and complexity not just in the context of New Zealand wines, but globally. Their wines are hand-crafted from estate fruit grown on some of the oldest vines and best sites in Marlborough, some plantings dating back to the 1970s. These older well-established vines situated on free draining silty clay loams are supplemented with fruit from closely planted hillside vines. Yields are low, and the grapes are hand-harvested. That's our attempt at an understated New Zealand statement: few hand-pick fruit in New Zealand (95% is machine-harvested), and Dog Point's Sauvignon Blanc yields, for example, are 50% below the average for the region. Dog Point's focus on pruning, soil health through organic farming, use of native yeasts and for one wine selected neutral commercial yeasts, all point to a quality and detail-obsessed producer intimately familiar with its region. Dog Point is in fact the result of a collaboration between two Cloudy Bay alumni, enologist James Healy and founding viticulturalist Ivan Sutherland. Both left Cloudy Bay at the end of 2003, and the first vintage of Dog Point released was the 2002 vintage. The winemaking is non-interventionist, and all the wines (with the exception of the stainless steel Sauvignon Blanc) are given extended barrel aging with minimal racking and handling. Bottling is done without fining and with minimal filtration. The resulting wines are intense, complex, with racy natural acidity and ripe, full fruit flavors. Finally, the name Dog Point dates from the earliest European settlement of Marlborough and the introduction of sheep to the district. These were the days of few fences, of boundary riders and boundary-keeping dogs. Shepherds' dogs sometimes became lost or wandered off and eventually bred into a wild pack. Their home was a tussock and scrub covered hill, overlooking the Wairau Plains, designated by the early settlers as Dog Point.

Vinous Media 92 "Lovely weight on the midpalate, providing a feeling of sumptuousness. This was whole-bunch-pressed and hand-harvested, and neutral yeast was used (20

Wine Advocate 91 The 2018 Sauvignon Blanc is on the tropical end of the spectrum, with hints of guava, pineapple and nectarinea real fruit bowl. It's

Wine Advocate 90 The 2017 Sauvignon Blanc shows hints of green on the nose but sits more firmly in the fig and stone fruit camp. It's

Wine Spectator 90 The crisp lime and grapefruit notes are lively and juicy up front, set on a fleshy body. Becomes more complex on the finish,

James Suckling 93 A wine that is full of excitement, showing an array of grapefruit, lime and lemon citrus as well as gently nettly herbal notes,

Wine Enthusiast 92 WE TOP 100 2015 Rank 91 Editor's Choice " Everything you’d ever want in a Sauvignon Blanc is here—and then some. Grassy, herbal, citrusy aromas

Jamie Goode 93 “One of my favourite New Zealand Sauvignons: Such a super wine, representing the best of Marlborough typicity, I reckon. Beautifully aromatic with a

Wine Spectator 88 "Velvety and open-textured, with strong black olive and mineral character to the currant fruit. Generous and distinctive but not for all tastes. Drink

Wine Spectator 89 "Spicy, showing barrel-fermented character, distinctive for its passion fruit, guava and tangerine at the center and the spicy toast character around it, finishing