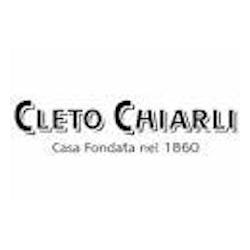 Lambrusco's history has been closely linked to that of the Chiarli family for a long time. In 1860 Cleto Chiarli founded the first wine-producing company in the Emilia-Romagna region, following the success that his homemade Lambrusco enjoyed in his 'Osteria dell'Artigliere', his restaurant in Modena. This was the start of a tradition of excellence leading to Chiarli's steady growth which has made it the greatest privately-owned Lambrusco company. In 2001 Mauro and Anselmo Chiarli, Cleto's great-grandsons and current leaders of the Company, decided to build a new winery under the founder's name, Cleto Chiarli. There, the best of what the Company has to offer is produced from carefully selected and homegrown grapes, with state-of-the-art equipment in an idyllic setting and, above all, with a unique know-how that only over 150 years of tradition can provide.The Chiarli estates, which comprise over 100 hectares of vineyards, are scattered throughout the Modena Province. The Tenuta Cialdini is named after General Enrico Cialdini, a famous Italian patriot of the Risorgimento. It lies at the foot of the hills, in the Castelvetro municipality, and its soil, mainly composed of silt on a gravel substratum, contributes to the production of excellent Grasparossa grapes, with their specific characteristics: intense red color and a fruity bouquet. The estate also comprises 7 hectares of Pignoletto vineyards, key to the production of Chiarli's best white. The Tenuta Sozzigalli lies in the best-suited area for the growth of the Sorbara variety, to the North of Modena close to the Secchia River. The soil is made up of clayey silt, key to the wine's peculiar light red color and neatness. The vineyards contain the best clones of this ancient vine variety, the result of a long and attentive selection. They are at the heart of the production of a unique Sorbara Lambrusco.

James Suckling 91 Deep nose of crushed berries and flowers with a gunflint undertone. Medium to full body, round and creamy texture. Such beauty and focus

The Vecchia Modena Premium Lambrusco di Sorbara represents the history both of the Chiarli wine Company and of Lambrusco wine itself. The bottle and label

Fondatore means "founder," and the name of this wine name bears special significance for Cleto Chiarli. The Lambrusco del Fondatore is a modern version of

Wow! This Lambrusco blew us away!! Lambrusco di Sorbara DOC is known as the most elegant & highest-quality Lambrusco clone, and boy does this one deliver!

Wow! This Lambrusco blew us away!! Lambrusco di Sorbara DOC is known as the most elegant & highest-quality Lambrusco clone, and boy does this one

Fondatore means "founder," and the name of this wine name bears special significance for Cleto Chiarli. The Lambrusco del Fondatore is a modern version of

Wine Spectator 88 "Well-cut acidity creates a firm frame for the flavors of raspberry, lavender and blood orange peel that ride the fine bead

CHIARLI 1860 is the oldest producer of Lambrusco and other wines in Emilia. The winery was founded in 1860 by Cleto Chiarli who, until that