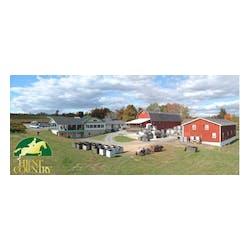 Art and Joyce Hunt, founders and owners of Hunt Country Vineyards, first met in high school in Corning, New York. After graduating from Syracuse University in 1971, Joyce began her career as a social worker. Art received his BS in Management from Virginia Tech the same year. He started selling insurance, but was "saved" by the flood of 1972: HUD needed people to help victims get settled in temporary housing. In 1973, Art and Joyce moved to the 170-acre farm of Art's grandfather in Branchport. The farm's proximity to Keuka Lake and soil were extremely promising for growing superior wine grapes. They planted about 50 acres of premium varieties for eventual sale to wine producers. It took a few years for the vines to mature and yield wine-quality fruit. Then Coca-Cola Company purchased Taylor/Great Western Wine Company and moved all operations to California. The market for wine grapes collapsed, bankrupting many growers. Art and Joyce evaluated the idea of a small farm winery and in 1981 launched Finger Lakes Wine Cellars, which they guided from a small proprietorship to incorporation in 1985. In the fall of 1987, they formed Hunt Country Vineyards, with the logo combining Art's family name and Joyce's love of horses. Art handles regulatory, fiscal and legal issues for the business, and maintains an active schedule in front of the public at festivals and tastings. He enjoys working with his hands, and around the farm, there is never a lack of things to fix! He is an active member of the Branchport–Keuka Park Volunteer Fire Department, and though rarely has the time, loves to sail with family and friends. Joyce is extremely active in the business, in strategic analysis, designing and planning of (and even cooking for!) major events, banking and public relations. She was appointed by Gov. Cuomo in 1987 to the Finger Lakes Regional Economic Development Council. She is a founding member and past president of the Keuka Lake Wine Trail, and serves in several other local organizations. She divides her free time among riding, walking and reading. Art and Joyce are recipients of the 1999 Unity Award of the New York Wine & Grape Foundation for major achievements in promoting unity in the industry.

"Hunter's Red is a unique, non-traditional red wine. We blend 2 red grapes with 1 white grape and forgo oak aging to produce a red

" We’ve been growing Vignoles since 1985 and it’s been a customer favorite for just as long. This luscious vintage bursts with citrus and exotic

Winery Notes Harvested in the deep of winter and pressed from grapes frozen on the vine, this genuine ice wine is a genuinely rare treat.

" In the 2015 vintage, we again blended grapes from our South and Main vineyards to provide the balance of natural acidity and sweetness that

" In the 2014 vintage, we again blended grapes from our South and Main vineyards to provide

" Vignoles is a fiesta of flavor! A little sweet and a little tart, our award-winning Vignoles displays lively citrus and tropical fruit notes.

"Our classic Semi-Dry Riesling is a Hunt family favorite and a mainstay of our Thanksgiving table. Its beautiful balance makes it extremely versatile in pairing

"Art and I released our first Riesling, a semi-dry version, in 1984. Over the years we began to wonder how a drier version might

"Foxy Lady Blush features the vibrant grape flavor of the Catawba, a native American grape grown in the heart of the celebrated Finger Lakes wine

"A fungus, botrytis cinerea, dubbed by the French the 'noble rot', often forms on the highly acidic Vignoles grapes, adding complexity to the flavor profile

When we think of summer, we think of a refreshing Moscato. Our Valvin Muscat grapes make a beautiful wine, so we added some bubbles to