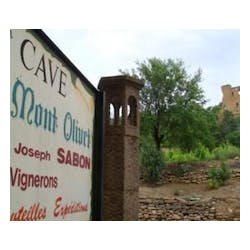 The wines of this estate, which traces its history back to 1547, are among the finest of Châteauneuf-du-Pape. Run by the esteemed Sabon family, Clos du Mont-Olivet is made in a traditional style: partial destemming of grapes, crushing and fermenting in concrete vats, and aging in large foudres. Making wine is a family affair at Clos du Mont Olivet, and the three Sabon brothers -- Jean-Claude, Pierre and Bernard have run the domaine for the last 30 years, with Bernard's son Thierry gradually assuming winemaking duties, starting gradually in 2001. The wines are composed predominantly of Grenache (usually around 80%), with Syrah, Mourvedre and Cinsault completing the blend. The vines of this estate average over 60 years old. The 29-hectares of Chateauneuf du Pape that the domaine holds (they also have 17ha of Cotes du Rhone vineyards) is made up of many small parcels, spread throughout the appellation, that vary in size between 21 ares and 3 hectares. Montalivet is a walled vineyard to the east that surrounds the domaine and features the Sabons' oldest vines. Since 1990, these grapes have formed the basis for the deluxe "Cuvée Papet" – an amazingly concentrated and complex Châteauneuf-du-Pape. Further north, Le Pied-de-Baud contains "galets roulés," the large oval rocks for which Châteauneuf-du-Pape is well-known. Although the vines here are younger, the spherical stones reflect the intense southern-Rhone sun, thereby ripening the grapes to full maturity. The third primary section of vines, located to the south, is known as Les Gallimades, a plot of smaller stones and gravel with excellent drainage. Blending wines sourced from these three areas, the Sabons fashion complex Châteauneuf-du-Pape that combines the fruit intensity and alcoholic strength of Grenache with a slight and appealing hint of rusticity. It only makes sense that such a renowned Châteauneuf producer would also make fabulous Cotes-du-Rhone, which indeed they do; year after year, these are among the best Cotes-du-Rhone values to be found.

Wine Spectator 93 "Kirsch, linzer and cherry pure notes stream through in this vibrant and expressive offering, displaying a lovely, silky feel from start to finish.

Wine Spectator 95 "This is solid, with a still-tight core of black cherry and dark plum fruit liberally laced with warm stone, garrigue, tar and alder

Decanter 95 "There's no Cuvée du Papet (their top cuvee) this year as yields were too low, so all that fruit went into this wine

Jeb Dunnuck 100 "Another best to date, the 2016 Châteauneuf-du-Pape La Cuvée du Papet from Thierry Sabon is pure perfection in a glass. More powerful than

Tasting Notes Lovely from the get-go, with bright quinine, honeysuckle and white peach flavors that give way to fuller salted butter, yellow apple and green fig

James Suckling 96 "This is 70% grenache with the remainder equal parts syrah and mourvèdre. Aromas of ripe raspberry, red plum and cherry, with herbs, pepper

James Suckling 94 "A beautifully crafted wine that has a deeply fragrant rose and red berry nose. The purity of grenache sings brightly. In the mouth

Wine Advocate 99 "Possibly the finest example of the Chateauneuf du Pape Cuvee du Papet since Mont Olivet’s unreal 1990, the 2010 is a blend of

Stephen Tanzer 91 "Bright ruby. Spice-accented red fruits on the nose and palate, with notes of smoky herbs and minerals adding complexity. Juicy and