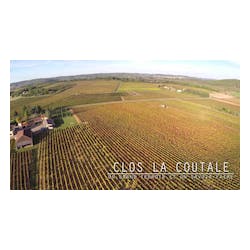 Deep in the southwest of France, amidst dramatic rock formations and cliffs, the Lot River slowly snakes its way along the valley floor, coiling covetously around the charming town of Cahors. The diversity in architecture serves as a proud historical mark left by many previous generations of inhabitants. Once a former Roman town, Cahors was also as a center of commerce during the Middle Ages that served as an important crossroads for pilgrims on the trail to Santiago de Compostella. Among the many specialties that have brought pride to the region, the constant has been its wine. A.O.C. Cahors is known as the "black wine" of the Southwest--the deeply inky, earthy wines that seem to complement the regional fare of duck (and duck fat!) so wonderfully. Cahors is also the birthplace of Cot, the grape more commonly known as Malbec. The Bernède family is an intricate part of this tradition, watching over one of the region's oldest domaines that was founded before the French Revolution.

A hearty, rustic red from Frances southwest, this Cahors has everything a savvy wine drinker wants: it is readyfor immediate consumption, has excellent structure to

Its no coincidence that the dusty-tannined Malbec grape is king in Argentina, the land of great swaths of cattle herds, because it so aptly pairs

" Deep ruby in colour. Aromas of blackcurrant, blackberry and prune. Fresh finish with mint and vanilla. A classic expression of Cahors in the South

Clos La Coutale is one of the oldest and finest producers in Cahors and their wines convey a wonderful sense of elegance. A blend of

"Though inky black, this is not the ferocious Cahors of legend (and fact), but an earthy, accessible wine that will give you a sense of

Wine Enthusiast 90 Top 100 Best Buys of 2014 "There is a smooth, polished feel to this balanced wine. Wood and blackberry flavors come together with mint

"When we tasted this wine we were greeted by an amazing, sultry nose of ripe berries, flowers and spices followed by roses, ripe plums, raspberries,

"Modern techniques but respecting traditional methods. All the grapes are destalked and pressed before fermentation in stainless steel vats, each grape variety from different parts