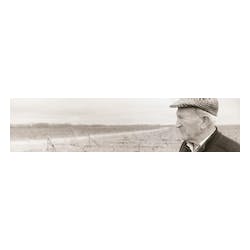 A self-made man It is often said that childhood shapes an individual's future, and every year from being a boy, Alejandro, following family tradition, learned from his father to make wine using grapes from small vineyards. He is the perfect example of the self-made man. A man who, in his youth, and while holding down various jobs, nurtured his dream of one day running a bodega. However, he had to wait until 1972 to have his own bona fide bodega; a modest 16th century stone-built bodega, from where almost all the winemaking process was carried out. Pesquera wines are always made from the whole fruit, after destemming. Temperature controlled fermentation lasts two to three weeks. Afterwards, and without clarifying, the grape pulp is directly transferred to an astute and subtle combination of French and American oak barrels that have been subject to various degrees of toasting. Where, in between frequent pump-overs, the wines are left to stand. Tinto Pesquera wines are aged in oak for 18 months while Reservas and Grandes Reservas are aged for no less than 24 months.

Tasting notes “Clean and brilliant with an attractive purple hue and a violet rim. Black fruit aromas such as blackberries and blackcurrants come to the fore.

TASTING NOTES LOOK: Clean and brilliant with an attractive purple hue and a violet rim. SMELL: Black fruit aromas such as blackberries and blackcurrants come to the

James Suckling 93 Lovely aromas of crushed berries, cola and chocolate follow through to a medium body, integrated and refined tannins and a flavorful finish. Complex

Vinous 90 - "Brilliant ruby. Smoky aromas of blackberry, cherry pit and game, with a subtle floral nuance in the background. In a wild, meaty style,

Robert Parker 91 "Condado de Haza is another Alejandro Fernandez (of Pesquera fame) property also located in Ribera del Duero. Like all of his estates, the