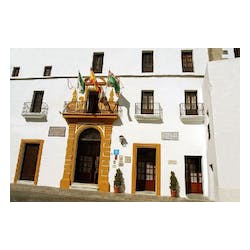 Convento San Francisco was founded in 1998 and today is owned by the Pitarch-Rodriguez family. The wines are made by Raquel Acebes, who has worked at the winery since 2003. To create a home for Convento San Francisco's winery, the owners restored a 13th-century monastery in the fortress town of Peñafiel. The building's fastidiously preserved historic walls and structural details make it an architectural treasure, one that belies the modern workings within. Convento San Francisco also owns the artisanal Aldeasoña project, which produces one wine per year from Tinto del País, the local name for Tempranillo. The grapes are sourced from ungrafted, pre-phylloxera vines over 95 years old located in several vineyard sites in and around Ribera del Duero. Rather than follow the rules prescribed by the DO, Aldeasoña takes the regional designation of Vino de la Tierra Castilla y León.

Roble is a pure expression of Tempranillo manually harvested from the old, gnarled vines of high altitude vineyards in the Ribera del Duero. This area

Roble is a pure expression of Tempranillo manually harvested from the old, gnarled vines of high altitude vineyards in the Ribera del Duero. This area

Wine Advocate 90 "A bit herbal and slightly reductive, the 2014 Convento San Francisco has contained ripeness and moderate acidity, with fine tannins and a straightforward