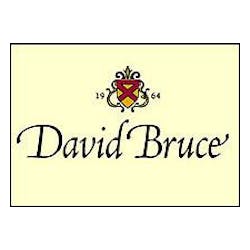 David Bruce Winery was founded during the revival of the Santa Cruz Mountain wine industry between the 1950s and 1970s. Bruce selected his vineyard site because of its proximity to Martin Ray and with the belief that the high elevation and mesoclimate of the area would be well suited for growing the Burgundian wine grapes of Pinot noir and Chardonnay.[1] In 1975, British wine merchant Steven Spurrier selected 1973 bottling of David Bruce Chardonnay for his 1976 Paris tasting that would put Californian Chardonnays and Cabernet Sauvignon against their French counterparts from Burgundy and Bordeaux, respectively. While the overall Chardonnay category was won by a Californian wine from Napa Valley, the 1973 David Bruce Chardonnay placed last of the 10 Chardonnays being tasted

"This Pinot Noir perfectly illustrates the characteristics of the appellation as well as David Bruce’s dedication to fine winemaking practices. It displays subtle nuances of

"This Chardonnay is striking in its ability to convey marshmallow roasting over a campfire. It's full-bodied and lush, its rich fruit core of apple and

"This Chardonnay comes from Don Miguel Vineyard in the Russian River Valley. It was handpicked, whole cluster pressed and fermented with native yeasts in French

"The Russian River Valley in Sonoma has a well deserved reputation for pinot noirs with ripe flavors and supple palates. Aromas of dark cherries

"An important and defining feature of this appellation is the distinctive combination of coastal coolness and afternoon heat. Aromas of cherries, cranberries, rose petals,

"A classic Russian River Pinot with dark ruby color, a deep core of black cherries and black raspberries, with a nice seasoning of French oak

"A classic Russian River Pinot with dark ruby color, a deep core of black cherries and black raspberries, with a nice seasoning of French oak

"The 2010 has aromas of cherries, cranberries, rose petals, cinnamon and vanilla. On the palate flavours of cherries, plum, vanilla, citrus, and toasted pecan

"The 2009 Russian River Pinot offers scents of black cherry, strawberry, and dried rose petal in the nose, with accents of vanilla and clove. Classic

"Aromas of red raspberries, black pepper, dark cherries, jasmine and a hint of lychee fruit. The 'russian river' style shows itself on the palate

These grapes come from several vineyards in Paso Robles and southern Monterey. The resulting components display notable differences,some exuding bright,spice-tinged fruit while others are jammy,

This appellation follows the coastline from Santa Barbara to the San Francisco Bay, benefiting from the cooling influence of the pacific. A core of bright

"Our gentle handling process allows us to preserve the intensity of fruit flavors associated with Pinot Noirs from this region. On the nose an elegant

"This wine has intense fruity aromas of raspberry and blueberry evident by its rich color in the glass. It has a full, dense and

"Stretching in a narrow band from Santa Barbara to the San Francisco Bay, the Central Coast region is characterized by the cooling influences of the