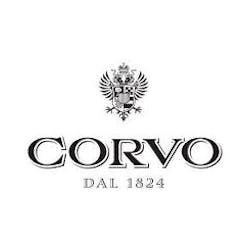 Corvo is a celebrated Sicilian wine produced in Casteldaccia, near Palermo. The name derives from a legend that a boistrous crow ("corvo" in Italian) was pestering the vineyard workers. A local monk who was said to have the ability to talk to animals took the crow to a cave where they negotiated an agreement: the crow would stay silent if his symbol would be used for the wine. Hence, the name and the black crow on the label. For many years, Corvo was one of the only table wines imported from Sicily. While that is no longer the case, it is still a popular brand. The signature rosso and bianco blends are expressions of the region's starring varietals. For rosso: Nero d'Avola, Nerello Mascalese and Pignatello (Perricone). For bianco: Inzolia and Grecanico. The winery also produces other reds, whites and a grappa.

"Bright straw yellow with clear greenish hints. The bouquet is intense, fruity and Mediterranean. Fresh, lively, with nice acidity, round, dry and well-bodied."

Corvo Insolia, a classic Sicilian wine, is produced from Sicilian vines cultivated on warm, sunny hills. Mediterranean and rich in the island’s scents it is

Corvo Rosso is a deep ruby red in color, this wine is dominated by intense aromas of Marasca cherry, rhubarb, licorice and graphite on the

Made from a blend of native grapes Insolia and Grecanico, this is a light-bodied but refreshing wine that recalls lemon zest, peach and green apple.

" Made from a blend of native grapes Insolia and Grecanico, this is a light-bodied but refreshing wine that recalls lemon zest, peach and green

"Made from Inzolia, Cataratto and Grecanico grapes harvested from Sicily's finest vineyards is a clear, straw yellow wine with brilliant greenish effects throughout. Behind a