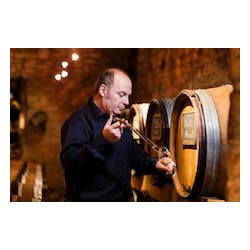 François Servin, along with his Australian associate Mark Cameron, direct the operations of this 30 Ha domaine. Tradition is important to the Servin family, which because of its long history in Chablis, owns some great parcels; four Grand Crus - Blanchots, Bougros, Les Clos and Preuses; six Premier Crus - Butteaux, Les Forets, Montee de Tonnerre, Monts de Milieu, Vaucoupin and Vaillons. Even the parcels of village are very well situated, with their largest, les Pargues, formerly being a Premier Cru. François, however, while appreciating the great tradition, has taken great steps to bring this domaine (with the spectacular potential sites) into the forefront of Chablis. He is resuming the practices of hand harvesting (all the Grand Cru are now hand harvested; a large portion of the Premier Cru, too). For new planting, he is using uncloned Chardonnay and planting it at greater density. Some cuvées are being bottled for us with no filtration, and we work closely together sharing ideas.

Wine Advocate 90-91+ "The Servin 2012 Chablis Premier Cuvee Les Pargues – from a site of manifestly but never official cru quality and constituting, as usual,

Wine Spectator 93 "This is flinty, showing mineral elements combining with apple and citrus notes, all playing off a vivid acidity. Features a creamy texture, fine

Robert Parker 90 "It’s rare for me to give a generic Chablis an outstanding rating, but it’s interesting to note that this vineyard was classified premier